Potheads on the run provide laughs in this stoner action comedy

For comedies about weed, the bar is admittedly pretty low. But add in the participation of red-hot, R-rated comedy king Judd Apatow and expectations rise as surely as smoke drifts upward.

In the shuffling but still raucous Pineapple Express, two everyday dudes -- slacker Dale Denton (Seth Rogen) and his pot dealer, Saul Silver (James Franco) -- run afoul of big-time drug dealer Ted Jones (Gary Cole). In a weird coincidence, Denton, who between bowls works as a process-server, witnesses Jones killing a man. He's startled enough to drop his doobie at the scene, which Jones pegs as "pineapple express," a particularly rare hybrid that only his sub-dealer Silver is peddling.

Since the genre was established in the 1970s, most stoner-comedy jokes rely on three basic premises: People who are high have delayed reactions; they make poor decisions; and they are easily distracted by grandiose plans that never come to fruition. And so it is here as Denton and Silver try to outwit and outrun Jones and his homicidal minions.

Rogen and Franco are enjoyable and funny, with Franco getting the better "stoner" lines. (He is the dreamier Chong to Rogen's more grounded Cheech.) The pair also gets some hilarious help/not-help from another dealer named Red (Danny McBride), whose allegiances twist on a dime.

There's some unevenness -- the dinner Denton has with his high school-age girlfriend's family should have been funnier -- but for every scene that drags, there's a howler sequence that follows. Despite being endlessly pimped in the trailer, the car chase where Silver gets his foot stuck in the windshield was still gut-busting and inspired.

Pineapple Express is directed by David Gordon Green, who previously helmed more sensitive indie fare like Snow Angels and All the Real Girls. That may account for the film's uneven pacing, and I'm not sure who is to blame for stretching this one-joke idea out for nearly two hours. (Rogen, Apatow and Evan Goldberg wrote the story and screenplay.) The last reel particularly grows tedious, with endless Tom and Jerry-style mayhem.

Pineapple tries for but doesn't find that elusive heart that made earlier Apatow joints such as The 40-Year-Old Virgin and Superbad such winners, despite featuring the same archetypes: decent enough guys who are mildly to severely self-deluded about their importance. But in spite of all the dumb, easy jokes, this is still the funniest film I've seen all summer. And in the final scene, Pineapple finally nails both well-earned laughs and the warm glow of male camaraderie, with a winky riff that finds our three heroes describing their recent adventures as if it had been a movie. It's a profane, male-bonding, pop-culture-lovin', sweetly affirming scene that's pure Apatow. 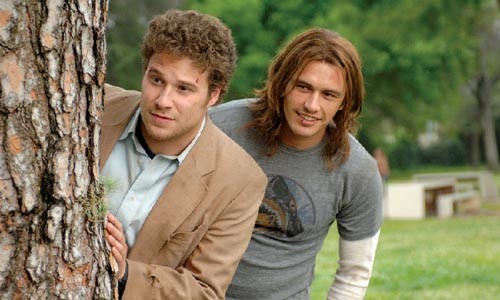