"We're just actors who just picked up our instruments five years ago." 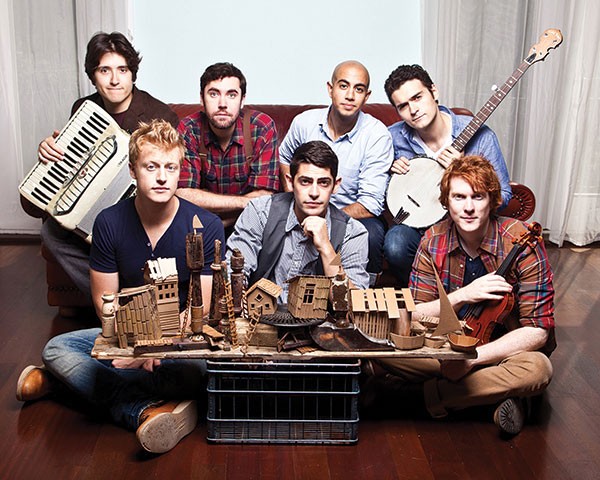 Leaning against the corner of a treehouse, PigPen Theatre Co. guitarist Ryan Melia plucks the opening melody to the band's song "Bremen," and two small girls immediately begin to dance. The band has ventured outside to Athena Montessori School in Austin to play for a South by Southwest badge-free captive audience, turned into a bouncing mass by the harmonizing, banjo-picking group.

As students of drama at Carnegie Mellon University, the men of PigPen blended dramatic flair with an adaptive passion for music. When they wrote their first play as a group, only half of them knew how to play instruments, and the music was meant to be funny. But the audience took note, and in the next project, the developing band decided to focus more on its sound. A turning point came at a theater festival in Martha's Vineyard, where the band gained confidence and impressed a producer.

While the group is admittedly known for storytelling, PigPen refuses to be confined to one medium, delving into literature, theater and film, as well as a unique brand of folk-tale pop. The result is an overarching production company: a joint venture between the eight members, now based in Brooklyn.

"We agreed we'd like to be doing more than just theater," says drummer Arya Shahi, "so we thought, why don't we just start a production company and aim for music, theater and film and novels, the whole nine yards?"

The band members give credit to the CMU drama department, which gave them the tools necessary not only to work together, but also to work individually as artists. Aside from his ballet training, Shahi cites collaboration as his most important tool. Banjo player Ben Ferguson agrees: "A lot of the first-year exercises are about being in a group, an ensemble. Naturally, the real world wants to pull you into this individualized sense of craft. And I think what CMU taught us was that strong sense of ensemble."

The band still keeps that in mind. Rather than establishing a hierarchy, every member is charged with accelerating ideas to their completion.

According to Shahi, "It's been about finding those people we want to work with, that enable us to work in the way that we do." Producers the band has worked with quickly realize the importance of putting the members in a room together and letting the rest happen.

"So many of us got better with each other," Shahi continues. "Writing music just feels so much more natural with these guys than it does when we sit in with [outside] musicians."

"It's about being on task: We need a kind of linear instruction process on how to get everything done, but it's also about everyone wearing every hat," explains guitarist Matt Nuernberger.

"We're impostor musicians; we're just actors who just picked up our instruments five years ago," he adds with a laugh.

The performance at Mr. Small's will be a blend of theatrics and music, bits of Depression-era washboard music alongside Celtic laments. With influences including Anais Mitchell and The Decemberists, Ferguson says, "oftentimes the musical style is dictated by the stories they're telling in their songs."

As in a play, establishing the setting of each song is integral to the creative process.

"We picked a world for the play — whatever play we were working on — before we wrote the play," banjo player Alex Falberg explains. "Whether it be an American tall tale, or an Eastern European cautionary tale, or a Celtic sea shanty: The music that was born in those plays was also inspired by those worlds."

So how do they create these worlds onstage? The band members say their biggest challenge was not bringing the elaborate settings to the live shows, but rather condensing their performances into a purely auditory experience.

"We're concerned with every little piece of how it's edited and put together" says Falberg. They encountered a similar struggle when they began writing their upcoming book, which is based on an old idea for a play.

The book is "the hardest thing we've ever done," according to Nuernberger. The challenge, they say, comes from the lack of performance in literature.

"With a book, we're not a part of the equation; we write it down and then we give it to you, and then you go off and create your own interpretation," Shahi says.

The members of PigPen Theatre Co. eagerly await their upcoming performance in Pittsburgh — some more than others.

"You guys do whatever; I'm going to hitchhike," Ferguson, when he learned about the band's day off before their performance.

When they're not inspiring Irish jigs or practicing for theatrical performances, the band has a favorite tour bus game: You have one day in Pittsburgh. You don't get full. What do you eat?

So if you can't wait to catch them at Mr. Small's, you might find the guys at Bangkok Balcony, South Aiken Bar and Grille, DeLuca's or Uncle Sam's Subs.

Maybe if you do a jig, they'll even play you a song.