Some of the 14 cast members will spend your pleasant evening out hustling up and down the spiral concrete staircase connecting the two theaters.

One challenge of staging Alan Ayckbourn's unique duet of plays House and Garden is obvious: The esteemed British dramatist wrote these 1999 comedies to be performed simultaneously, by the same cast, in adjoining theaters, so that each play's on-stage action is the other's offstage.

Such logistics alone are a cheerful challenge to Pittsburgh Irish & Classical Theatre in these plays about infidelity, alcohol and celebrity, both set on an August day. Some of the 14 cast members will spend your pleasant evening out hustling up and down the spiral concrete staircase connecting the backstages of the big Charity Randall Theatre (House) and the smaller, downstairs Henry Heymann Theatre (Garden). And they'll have to do it in about 15 seconds or risk delaying the action.

No wonder the plays -- a London hit -- have apparently been produced just twice stateside, in Chicago and Manhattan.

A more subtle challenge is Ayckbourn's penchant for mixing dropped-trousers farce with real emotional trauma. Take this Act I sequence: Teddy Platt is a middle-aged philanderer whose wife, Trish, now pretends he doesn't exist. But because an expected visitor holds the key to his political career, Teddy requires a good front, and his selfish groveling to Trish bares their utter dysfunction, sexual and otherwise.

But this is comedy, so in rehearsal, director Andrew Paul and cast contrive some physical business to escalate the laughs, concealing Pearl from the self-absorbed Teddy as he unwittingly spills his guts to the wrong person.

And don't forget the drunken French film actress, the maypole-dancing children or the big rainstorm that figure in the plays.

"Such is the comic intricacy of these interlocking relationships, such are the sublime moments of farce, that it is easy to miss the utter bleakness of Ayckbourn's themes: alcoholism, incest, marital breakdown, mental breakdown, above all our complete failure to communicate with one another," wrote Robert Hewison, reviewing the original production in London's Sunday Times.

Each play stands on its own, but reviewers agree each benefits from seeing both. Melissa Grande directs Garden; the ensemble cast also includes Mary Rawson, Beth Hylton and Leo Marks. 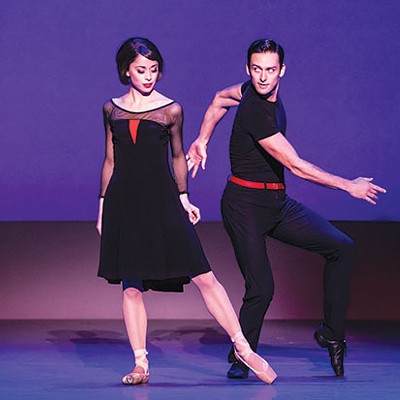