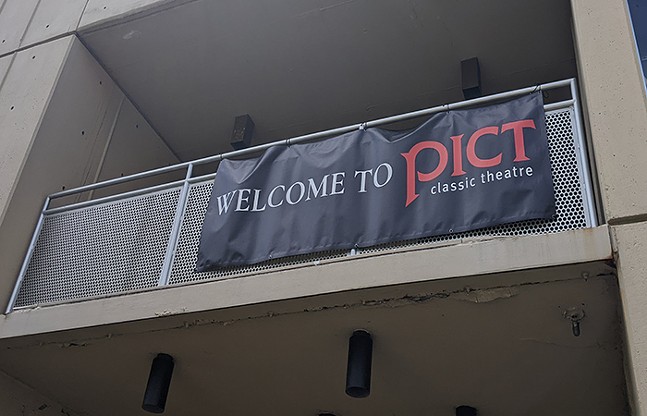 CP Photo: Amanda Waltz
A sign for PICT Classic Theatre hangs over the entrance to WQED Studio in Oakland
PICT Classic Theatre announced that it has removed its artistic and executive director, Alan Stanford, just days after Pittsburgh City Paper published a story outlining multiple sexual misconduct allegations against him.

On July 5, the theater company sent a press release that reads, "At its June 28, 2022 meeting, the Board of PICT Classic Theatre determined that it was necessary to make a change in the organization’s leadership and voted to remove Alan Stanford as the Artistic and Executive Director at PICT."

It went on to say that Eileen Clancy, co-president of PICT's Board of Directors, will serve as acting executive director "until further notice." The board did not name an acting artistic director.

The decision comes days after City Paper published a story on June 30
investigating why PICT canceled its production of Boys in the Band. PICT claimed that the show, scheduled to open on June 18 and run through July 9 at WQED’s Fred Rogers Studio, would “not move forward due to insufficient funds to cover production costs." However, sources allege that the real reason was tied to multiple sexual misconduct claims filed against Stanford.

On July 1, Stanford responded to City Paper's request for comment after the story ran. He says the claims in the story are "inaccurate," but declined to elaborate any further.

A known stage, television, and film actor in Ireland, Stanford relocated to the U.S. in 2008 to join PICT as an actor and director. Stanford was tapped to lead the company in 2013 after the forced resignation of its co-founder, Andrew Paul.