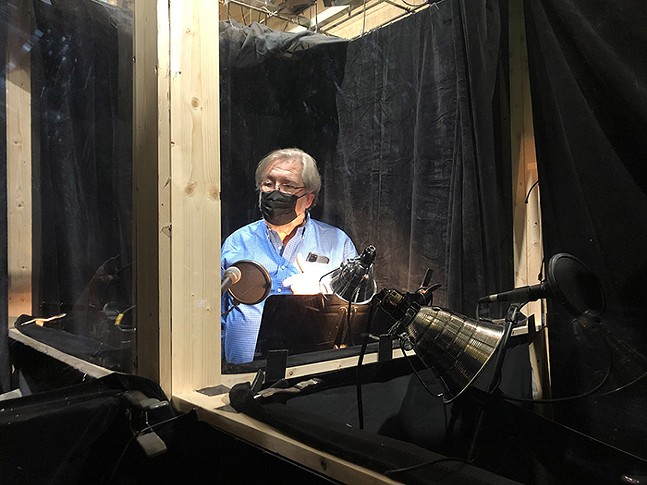 Photo: PICT Classic Theatre
Director Alan Stanford tests the sound booths before rehearsal for The Strange Case of Dr. Jekyll.
Seven months have passed since I’ve last been in a theater, and if missing a good production is painful for your humble reviewer, I cannot imagine the anguish that comes for the actors, technicians, and artists behind the scenes who are waiting for the curtains to open once again.

Fortunately, PICT Classic Theatre announced last month that they were the first to receive approval to resume full-contract work with the Actors’ Equity Association during the pandemic, beginning with The Strange Case of Dr. Jekyll.

At the very beginning of the local nonprofit’s newest production, set in 1880s London, we’re introduced to a character that is part “a most gentle man,” and part “monster.”

Thus begins the long-told tale of Dr. Jekyll and Mr. Hyde, this time adapted for the stage. Or, in this case, the airwaves, as Alan Stanford, PICT artistic and executive director, and the director of this performance, has adapted the script into a radio drama, being streamed virtually online through Sun., Oct. 31.

According to a press release, the nine-person cast rehearsed and recorded in the WQED Studios with COVID-19 health protocols in place, including socially-distance recording booths, daily temperature checks, testings, and mask requirements.

One would be hard-pressed to find a more perfect production for the pandemic, as the radio drama comes with no visuals and forces one to shut out the outside world for the hour and 57 minutes of the performance. The recording and editing is clean and crisp, and it’s best to listen in a quiet room with no distractions.

For those familiar with another local theater group, Bricolage Production Company, which has performed live radio-themed broadcasts in front of audiences for years under its Midnight Radio series, you’ll have a fun time trying to pick out the foley sound effects, like doors closing and an especially impressive sound effect of horse carriages riding off into the distance. (Also, the screams of murder are quite perfect for this time of year.)

All of the characters’ voices are distinct enough to be able to tell apart, which is crucial for a radio performance. I will admit, however, that halfway through, curiosity got the best of me, and I couldn’t resist looking up who played Dr. Jekyll. (It was the great Pittsburgher Tony Bingham, who left a lasting impression on me as Charles Wychwood, a tormented poet in Quantum Theatre’s 2018 Chatterton, and so the rest of the production saw Jekyll take on Wychwood’s rustled gray hair and cardigan red sweater, for better or for worse, in my head.)

Most know of the story of the twisted mind of Dr. Jekyll and his tortured other half, but that’s no reason to skip this tale. It’s smartly told, well acted, and worth your time to hear it again. And this time, you can close your eyes while you do.