Pickle-inspired brew from East End Brewing and Primanti Bros. is back for a limited time | Drink | Pittsburgh | Pittsburgh City Paper

Pickle-inspired brew from East End Brewing and Primanti Bros. is back for a limited time 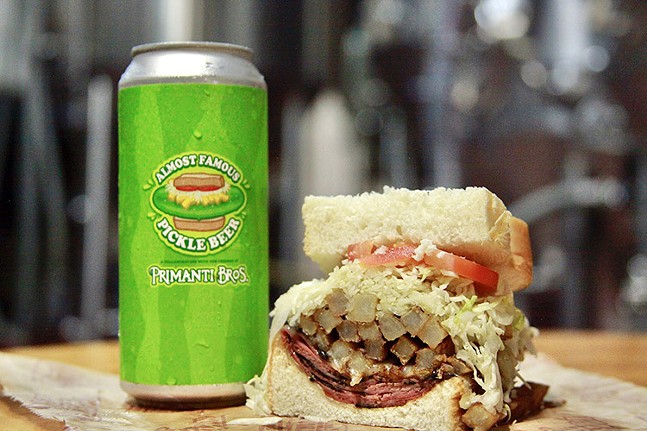 If you missed the chance to grab a four-pack of the briney brew last year, you’re in luck: the industry giants are bringing back their pickle beer for a limited run this Wednesday.

Almost Famous is brewed with about 600 pounds of cucumbers, coriander, sea salt, fresh dill, and, a new addition this year, black peppercorn. The cucumber peppercorn gose clocks in at 4.1% ABV, making for a light, slightly-salty, and savory beer that’s perfect for warm weather drinking.

“The fresh cukes really come through this year, and the new peppercorn addition definitely accentuates the savory notes on the beer’s finish,” said Scott Smith, founder and owner of East End, in a press release.

Almost Famous will be available at select Pittsburgh-area Primanti Bros. and East End in 16-ounce cans and four-packs to-go (curbside pickup and home delivery are available through the brewery). The brew is available as long as supplies last.