Piano Day 2019 brings the piano to the people 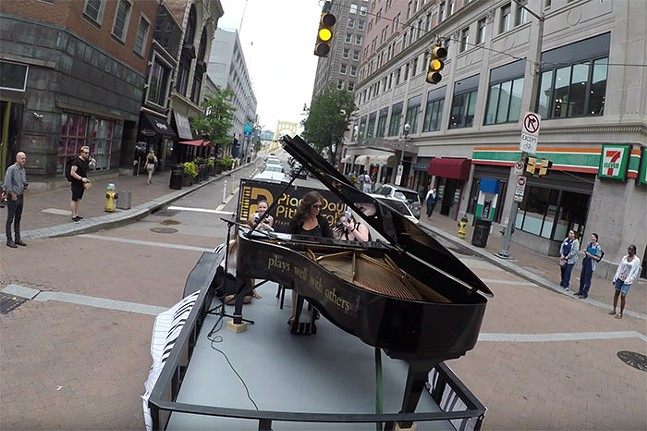 For an instrument as ubiquitous and endlessly relevant as the piano, it can be kind of a pain to find a decent one to play on in Pittsburgh. That was a problem that led Pittsburgh composer and pianist Dubravka Bencic to create Pianocentricity, a performance series devoted to acoustic piano performance.

"In Pittsburgh, there are very few venues with acoustic pianos that are in somewhat good shape," says Bencic. "So we had to find venues, and then negotiate the price of the venue with the tuning of the piano, and then just DIY everything else from scratch."

The goal of Pianocentricity is not only to expose listeners to high-quality pianos being played by professional performers but to allow audience members to explore and play the pianos themselves. The result is a sort of democratizing of an instrument that is often restricted to elite venues, and to remind the general public of just how good a well-tuned Steinway can sound.

This weekend, Pianocentricty achieves both of those goals when it hosts a day of free performances as part of Pittsburgh Piano Day at PPG Place.

Pittsburgh Piano Day was founded by piano technician Peter Stumpf in 2016 with goals similar to Pianocentricity, though the latter is more focused on intimate, indoor music venues, while Stumpf's vision was all about literally bringing the piano to the people. You may remember Piano Day's trademark move of driving a truck around Pittsburgh with a professional pianist playing a $100,000 Steinway & Sons piano in the back.

Bencic has twice performed on the truck and in other scheduled Piano Day performances, but this year she became more involved in the curation. The lineup and program on Sunday were chosen entirely by Bencic, as a part of Stumpf's effort to focus Piano Day 2019 more on women in music.

Starting at 2 p.m., Pianocentricity's program features Bencic on piano with Alejandro Pinzon on bandoneon (a kind of concertina) and Leslee Becker on cello; a duet between PJ Roduta on piano and Becker on cello; Bencic with Brian Riordan on electronic instruments; a solo by Lu-Han Li on piano; and finally, an experimental collaboration by Bencic, Luke Starcher, and Eric Weidenhof called "FromSpaceFormSpace."

Bencic explains that "FromSpaceFormSpace" is built around the new work by Starcher, who's better known as a producer and IDM DJ Good Dude LoJack. Unlike Starcher's standard output, which falls in the range of IDM and techno, the new unreleased record is darker, more abstract, and vaguely apocalyptic. There's little-to-no percussion, which Starcher and Bencic thought would work well as a foundation for improvisation for a new piece.

"What Luke was talking about was what he called 'saving room.' He likes to save a lot of room for others to contribute," says Bencic. "In that sense, it’s challenging in a way that we all need to play less and contribute less. We all like to play a lot, and fast — at least I do — and this would be getting in the zone of being very relaxed and meditative and adding little riffs of sound to Luke’s soundtrack."

Piano Day 2019 kicks off on Sat., Aug. 24 with the traditional grand piano tour around Pittsburgh. Performances on Sunday start at noon at River Vue Patio, Heinz Hall, PPG Place, and "open play" at Market Square all day. Stumpf says he recently learned that a 95-year-old woman was arranging to come down from her nursing home to play the Steinway at Market Square.

"It would be wonderful to hear her play and then have a five-year-old to go up and play," says Stumpf. "The piano is for everyone. It's the one invention we have never ruined."