A re-opened family Italian restaurant, in Mount Lebanon, is a keeper

It's no surprise that Italian was one of the first foreign cuisines to become utterly assimilated into American home cooking. A simple, satisfying Italian meal of noodles and sauce is inexpensive, easy to prepare, and sure to please most everyone at the table, while meat, fish and poultry dishes offer opportunities to scale culinary ambition a little — or a lot — higher. Similarly, Italian restaurants tend to transmit the culture's emphasis on gustatory satisfaction, and have long provided go-to places for family dinners out.

Arising from this tradition is a certain type of Italian restaurant that has all but been replaced by trendier variations in the hot urban dining marketplace, though it persists in certain suburban enclaves. These aren't competing with the latest in locally sourced or regional cuisines; instead, they're the place you go with your grandparents for their anniversary, or with your kids for a nice meal that everyone enjoys. At such a restaurant, you don't expect gourmet wood-fired pizza, small-batch artisan olive oil or some trendy risotto with melted leeks. But homemade pasta and marinara are a good bet, and there's still plenty of pleasure to be had in old-fashioned breaded chicken and veal.

So we ventured to Piacquadio's, a venerable family business which, instead of bowing out with the generation that started it, has been reopened by the sons of the original owners. Since the menu didn't seem to have changed in 30 years, we were counting on the vigor of the younger generation to deliver a classic Italian-American meal. And we got it.

Located smack in the middle of a strip mall in the commercial borderland between Mount Lebanon and Castle Shannon, Piacquadio's features a windowless decor that is tasteful and pleasant, if a bit dated, and service that is Pittsburgh-friendly but not overly familiar. Like the surroundings, the food was far from cutting-edge, but we had few complaints as we forked up one satisfying dish after another.

Take the manicotti. It was only recently that we even learned that, originally, this dish was made not by stuffing fat tubes of pasta, but — laboriously — by making crepes and rolling them around filling. We certainly never encountered such manicotti in the restaurants of our youth. But Piacquadio's prepared manicotti in the old way, with substantial crepes that embraced the ricotta and absorbed some of the sauce. The presentation was also strictly old-school, swimming in dark-red sauce and a thick ooze of melted cheese, but the crepe took both fillings and toppings to another level.

Beans-and-greens with sausage was superbly executed, with still-crisp escarole stems and firmly tender onion contributing to a satisfying texture. Another pleasing touch was a distinctive creaminess to the broth (Jason suspects parmesan rinds) that subtly enriched every bite. 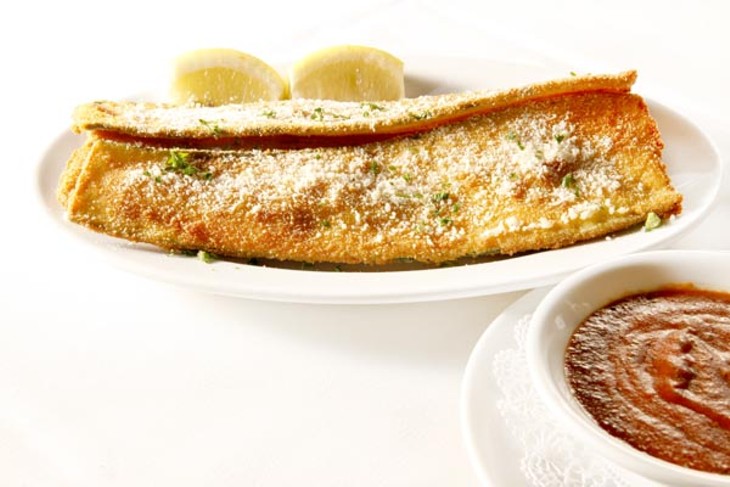 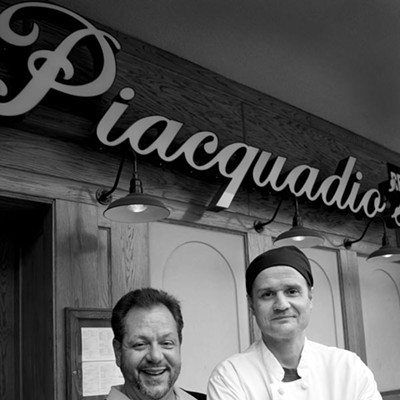 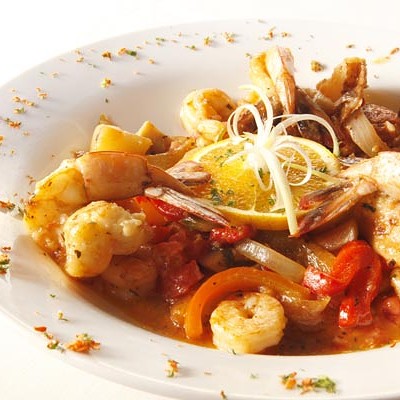 Pizza bread was a straightforward appetizer that was exactly what we expected: more deep-red tomato sauce and melted mozzarella atop a hoagie roll that was sufficiently crusty without threatening anyone's gums. A veal parmigiana sandwich was reminiscent of the pizza bread but with a thin, nicely done fried veal cutlet tucked inside the loaf. Chicken has so thoroughly supplanted veal in items like this that we had almost forgotten how veal's richer flavor in a thinner package makes a better fellow to the sauce, cheese and roll.

Homemade gnocchi were overly dense dumplings in a light marinara sauce that couldn't hold center stage; this dish might pass with a heartier sauce or a good meatball, but on its own, not so much. Jason's linguine with clam sauce was simultaneously disappointing and better than most: The noodles were rather past al dente and the sauce was more creamy than brightly briny, and yet it contained a bounty of good-quality chopped clams and its flavor profile was well balanced, even if it didn't match Jason's ideal.

Meanwhile, a special of pollo Mandaccino was both unusual and successful. A stack of chicken cutlet, spinach, feta, sausage and another cutlet seemed almost an homage to the absurd portions that once defined Italian cooking, but it was hard to argue with the flavors. Spinach and chicken is a tried-and-true combination; the addition of salty feta and assertively spicy sausage took it from dependable to delicioso.

We're glad the Piacquadio brothers re-opened their parents' restaurant. In the category of old-style family Italian restaurants, it's a keeper.