Photography show at the Carnegie mixes nine distinct perspectives on Downtown with some historic ones. | Features | Pittsburgh | Pittsburgh City Paper

Photography show at the Carnegie mixes nine distinct perspectives on Downtown with some historic ones.

Picturing the City covers much ground — but could have highlighted individual artists more. 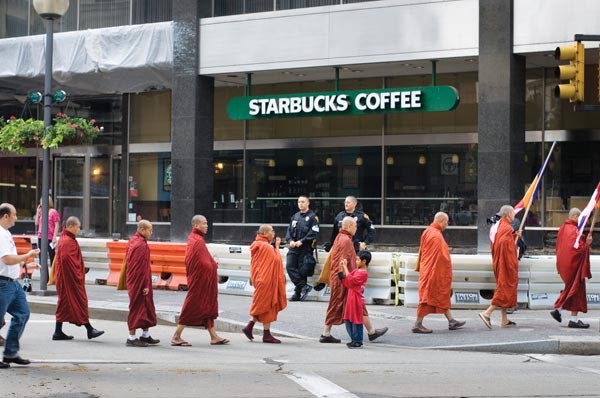 Photo courtesy of the artist
"Burmese Monks and Starbucks" (2009), by Mark Perrott.

During the 20th century, Pittsburgh was the subject of four notable photographic surveys. In 1907, Lewis Hine was part of a team of sociologists examining severe working conditions here, taking Pittsburgh as an archetypal American industrial city. In 1950, Roy Stryker, who had managed documentary photography projects for the Farm Security Administration and Standard Oil New Jersey, was hired by the Allegheny Conference to create the Pittsburgh Photographic Library (PPL) to document Renaissance I. And in 1955, W. Eugene Smith came to Pittsburgh to illustrate a chapter of a book celebrating the city's bicentennial and ended up producing an epic visual poem that redefined the possibilities of the photo essay.

The pictures give credit to the planning and investments that have gone into many positive changes of the last 20 years. The exhibition describes the revitalization of the North Side and the Cultural District. Sports, and the Penguins especially, are strongly represented, perhaps most evocatively in Rial's picture of fans at the last game at the Civic Arena. There is kayaking on the rivers and skateboarding under the David Lawrence Convention Center, and there are atmospheric skylines and aerials. There are people using public spaces in a myriad of ways. And there is a great deal of construction: Blocks of images address the Civic Arena, the Consol Energy Center and the August Wilson Center. A photo taken by Rosensteel (who is married to CP arts editor Bill O'Driscoll) of the UPMC sign going up on the US Steel building speaks to economic shifts in the region.

The show is rich in views and the city looks good, and many of the images document the kinds of dynamics and tensions, small and large, that define both the everyday and the monumental. These kinds of pictures, like Farlow's image of a diverse group of Pittsburghers waiting on the North Shore for fireworks to begin, convey how life in Pittsburgh is lived; through them, a space becomes a place. Vitone's picture of a lone soldier checking his email in Mellon Square Park is enhanced by an empty panorama. O'Neill's image of mourners consoling one another at a police funeral has an emotional intensity. Kelly's photograph of a businessman about to cross Smithfield is physically distanced yet conveys a sense of moment, as does Judkis's picture of police assembled in riot gear at the G20 protests.

The current work hangs in relation to older pictures of Pittsburgh from the Carnegie's collection: photographs by Hine and Smith, Teenie Harris, Margaret Bourke-White and Edward Weston, and street photography by five of the PPL photographers. These earlier pictures offer an opportunity for visual dialogue. Farlow's image of a man planting a tree in a park hangs a few feet away from Smith's picture of the same, made 50 years before. Harris' picture of a car accident predicts Vitone's panorama of a traffic snarl outside of Wood Street station, where a car has hit a bus.

The show's organization, however, belies a missed opportunity. The historic pictures are hung in groups. That means that the combined effect of Teenie Harris' four pictures, for example, gains added strength because we see a consistency in perspective and feel the photographer's presence. The more current work, meanwhile, is grouped together in a narrative driven by content, which draws attention away from the authorship of the images, so that the photographers' points of view become lost in the busy flow. Each of the nine contemporary photographers has a strong visual sense and style that allow his or her individual photographs to work off of each other. To see this, one has only to page through the exhibition catalog in the gallery, where the pictures are grouped by photographer.

A survey can be more than an inventory; if this body of work is meant to be a time capsule, surely there is value in recognizing that the photographers' perspectives are also part of our historical legacy. It applies for the historical work; it could apply for the current work as well.