Photographer Stephen Chalmers captures the snowbirds and desert rats of the Southwest.

There is a presumably intentional weirdness to the portraits and landscapes alike. 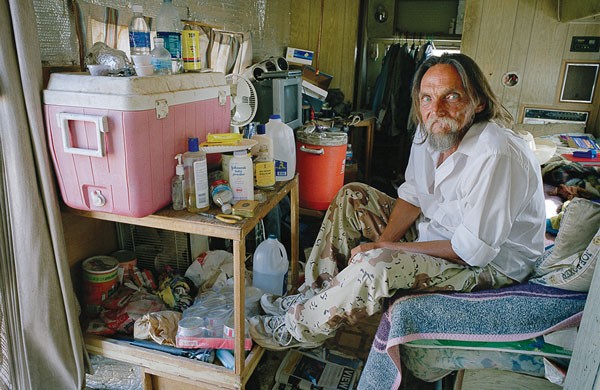 Stephen Chalmers' Transience, at Pittsburgh Center for the Arts, focuses on Westerners who fall into two demographics: snowbirds and desert rats, loosely linked by the fact that they reside in homes designed to be mobile. Chalmers, who recently relocated to Youngstown, Ohio, works in a documentary vein, and his thoughtfully considered and composed images are packed with sociological detail.

Petroleum-fueled mobility was a mythicized promise of postwar America, and Chalmers looks at today's resultant communities, which appear to consist of fairly isolated individuals. Concentrating on the Southern California and Arizona desert, the exhibit consists of 13 not-quite-diptych pairs of individually framed color photographs. One of each pair is a posed portrait of people in compact homes, and the other depicts nearby or representative surroundings. The photographs are by no means condescending, but there is a presumably intentional weirdness to the portraits and landscapes alike.

Half of the portraits depict "snowbirds," typically middle-class Midwestern retirees who head southwest for the winter in RVs or towed trailers. Shown perched amid overstuffed furniture, flat-screen TVs and mementos of a conventional and presumably rewarding life, they generally appear self-possessed, though shoehorned into crowded seasonal homes.

The remaining portraits depict year-round residents sometimes known as "desert rats": lower-middle-class (if that) eccentrics living on the margins, in mobile homes that appear to be immobile. This group is similarly photographed with a wide-angle lens in small spaces, surrounded by their accumulated belongings, but it's a whole other story of scavenged materials, leaky roofs and sidelong glances. Mobile or stationary, all seem to have more stuff than places to put it. In the case of the snowbirds, that's because shopping is a way of life. In the case of the desert rats, it's because you never know when you might find a use for something.

Several of the landscape images depict the Salton Sea — a bizarre, 35-mile-long lake formed by accident 100 years ago — along with clusters of trailers and RVs, and such photogenic subjects as a burning mobile home or a sun-raked pet cemetery. The theme appears to be isolation and loneliness, with not an interaction nor a community space in sight. As with most reports on life on the periphery, the strangeness of it (to our eyes, anyway) is the point.