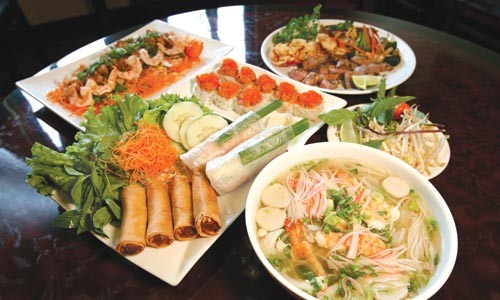 
For years, Castle Shannon was a bit of an enigma to us. Was it, as its name suggested, a little spot of the Emerald Isle in Pittsburgh's South Hills? Did it really have a castle? Recently, we've discovered some of the charms of this romantically named suburb. No, it doesn't have a castle, but a quirky, curiously narrow little downtown along the trolley tracks, with a parallel commercial strip along Route 88. And if Castle Shannon was once an Irish enclave, today its mix of old and new businesses includes a Vietnamese restaurant that also promises Japanese sushi and hibachi-style dinners.

Taking its name partly from the road that serves it, Pho Kim 88 is located in a small strip mall. Its butter-yellow walls and mix of Asian and European décor are welcoming. The menu is simply divided among starters and Japanese and Vietnamese entrees.

The deep-fried tofu had a wonderful texture, lightly crispy on the outside, silky on the inside. Ginger-lemongrass sauce added subtle savory notes.

As we tasted these appetizers, our sushi arrived, crowding our table and portending a theme for the evening: too many plates, too fast. Not a moment after this, it seemed, our entrees were served. As we rushed to finish off dishes so they could be cleared, we were frustrated that the kitchen -- accustomed to readying take-out orders, perhaps? -- wouldn't allow us to eat at our own pace.

Timing aside, the sushi was excellent. Spicy tuna roll included an assertive mayonnaise/chili oil mix to heat up the palate along with crunchy cucumber to cool it. A light sprinkling of sesame seeds on the outside of the tightly packed rice added a nutty flavor without overwhelming the fillings. Salmon sashimi consisted of four thin slabs of rosy, velvety salmon. Instead of the traditional cellophane noodles, it was served on a bed of thread-thin grated carrots.

With our hot entrees came some confusion. We had been provided with an array of condiments, including a clear garlic-chili sauce, the dip for the spring rolls, and bottles of fish sauce, hoisin and spicy sriracha. We were not, however, provided with any guidance on their recommended usage. Our big bowl of bun -- plain vermicelli with an array of toppings -- needed a sauce to unite the ingredients, but which to choose? A scallion pancake had a bit more native flavor, but still would benefit from something more. We're not new to Vietnamese food, but we were still confounded.

After some trial and error, the garlic-chili sauce seemed to be the key, its flavor bold but light, allowing the grilled chicken, tempura shrimp and fried spring roll on the bun to remain the focus of the dish, ably assisted by bean sprouts, lettuce and crunchy fried shallots. The chicken was tasty, if a bit dry, and the generous variety of distinctive ingredients created a dish in which no two bites were ever the same.

With the scallion pancakes, the difference was in our impressions: Angelique found it to be bland, slippery and greasy, while Jason relished the crispy edges of the eggy batter -- more like a thin omelet than a flapjack or even a crepe -- and found that, once again, the garlic-chili sauce saved the day. He still couldn't figure out how best to eat it -- the large pancake was folded over its fillings of bean sprouts, sliced chicken and shrimp -- and neither chopsticks nor fork seemed up to the task.

Last came our steaming bowl of pho, its surface pooled with bright red oil. It was so hot that, even after we were done with our many other plates, it had scarcely cooled to an edible temperature. Careful slurping let us enjoy the thick noodles, reminiscent of Japanese udon, whose wonderful tenderness didn't cross into mushiness. Thin beef slices were bland, but more gristly-looking chunks were tender and delicious, offering a hearty meat flavor. The small wedge of lime was inadequate to brighten our deep bowl, and Angelique thought the whole thing could use some salt.

It was an indicative ending to a meal that included some promising, even delicious, dishes, but that suffered from poor timing and inadequate guidance. Pho Kim 88 is probably an excellent place to get take-out, but it has not perfected the eat-in experience.