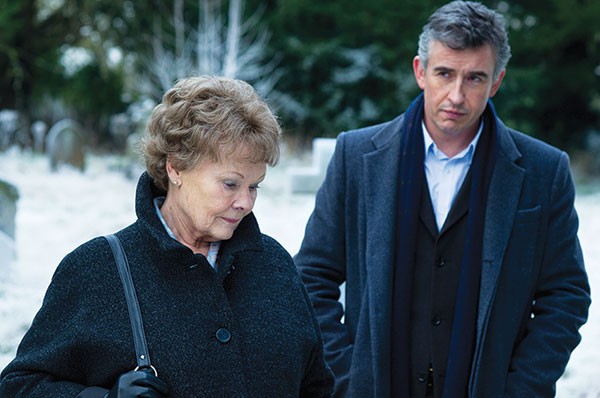 Two for the road: Judi Dench and Steve Coogan

Judi Dench has always been so commanding on film that it's hard at first to adjust to her in Philomena, where she plays an aging Irish woman searching for the child she was forced to give up for adoption 50 years earlier. But it doesn't take long for her darting eyes and timorous mien to convince us.

Philomena is a wonderful collaboration between a vigilant director (Stephen Frears), a great acting dame and the canny Steve Coogan, who co-wrote the script (based on a true story) and plays Martin, the sardonic journalist who accompanies Philomena on her search for her son. Their journey ends up indicting a perpetually callous and self-serving Catholic Church that's more interested in covering its ass than in healing souls.

Philomena and Martin are as different as two people can be: She's literal and he's rhetorical — which means she doesn't know when he's joking, let alone what he's joking about. ("She told four people today that they're one in a million. What are the odds of that?") They're the oddest of couples in a road movie that's every bit as tender as it is hilarious, and that asks us to consider whether anger or forgiveness is the better way to respond to the unforgivable.