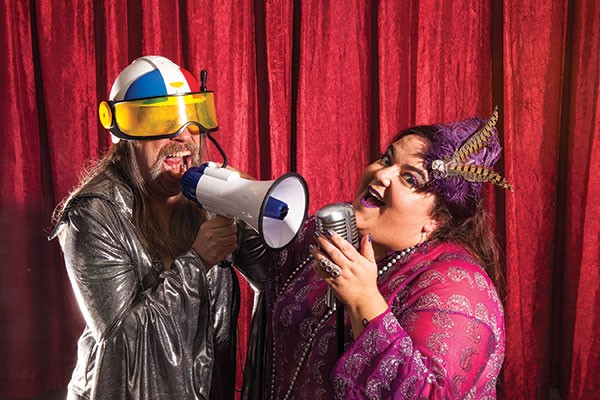 Photo by Heather Mull
I got you, babe: Tommy Amoeba and Phat Man Dee

It was a classic tale of boy-who-dresses-up-as-a-caterpillar-and-yells meets girl-who-swallows-glass, that day back in 2000 when Phat Man Dee first encountered Tommy Amoeba.

"It was a Thanksgiving Infectious Variety Show, at the Oakland Beehive," Man Dee recalls. "Tommy was actually dressed in a pilgrim costume, and his friend was dressed in a turkey costume. The pilgrim costume covered the front half of him, and only to mid-thigh. He was marching back and forth like a Greek-chorus kind of thing in between acts for no apparent reason. He had a fake rifle and he and the turkey guy walked back and forth.

"Later, he came back out and he had divested himself of most of the pilgrim outfit, but he still had the American-flag Speedo on, and he had the guy with the turkey costume with him, and he was engaged in the act of faux-copulation. And I was like, ‘Who's that guy? Wow!'"

Now, 14 years later, Man Dee (born Mandy Kivowitz) and Tommy (Thomas Delfaver) have been married over a decade and are basically local music-and-performance legends: She's well-known as a jazz singer and general personality, and he's known equally for his band, Amoeba Knievel, and for being that guy who goes to rock shows and yells "Aaaaahhhhhh!" instead of applauding. Man Dee has two albums under her belt and is preparing for the release, on Wed., Sept. 24, of her latest, Hey Phat Chick, with her band, The Cultural District. Tommy has a new album, too — his first, after over a decade with Amoeba Knievel.

Amoeba Knievel had recorded a handful of songs over a period of a few years, but none of those have yet seen the light of day. The batch of tunes on This Is Only A Test, though, came out of a session at Mr. Small's studios, which Tommy booked as part of a deal with Small's in which Man Dee had helped put together a New Year's show and was compensated with studio time. (Both artists' new albums were recorded there, with engineer Larry Luther.)

"This [recording session] kind of leapfrogged over [the older one] because this one was ready and mastered more quickly," Tommy notes. That explains some of the surprises inherent — like the absence of "The Ballad of Tommy Amoeba," an Amoeba Knievel classic that serves as Tommy's de facto theme song, and explains the story of "the lowest form of life," as he refers to himself. (After he developed the nickname, which came before his music career started, he says he told his mother, who responded, "Great — my son, the lowest form of life!")

Amoeba Knievel's music is generally relatively simple punk and New Wave-style rock, infused with a barrage of pop-culture and sci-fi references and a healthy dose of absurd humor. Tommy put together a page on the Amoeba Knievel website on which references are hyperlinked to their antecedents — everything from the Wikipedia page for James T. Kirk to a YouTube video of an Indigo Girls song, and information on plenty of science-fiction stories. It's a sort of annotated Amoeba.