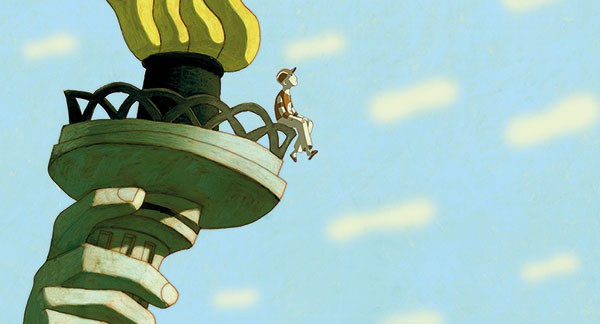 To be screened in two versions: dubbed in English and in French with subtitles. See schedule for details at rowhousecinema.com. Starts Fri., Aug. 12. Row House Cinema

In this new animated adventure from French directors Jean-Loup Felicioli and Alain Gagnol (A Cat in Paris), Leo is an 11-year-old boy with a secret. He’s stuck in a New York City hospital being treated for a serious illness, but he’s discovered he has the capacity to disconnect from his corporeal form and fly around the city. It’s an exhilarating break from sickness.

Meanwhile, a villain, who plans to wipe out the city with a software virus, injures an investigating police detective. The cop winds up in the same hospital as Leo, where Leo, who dreams of being a cop, shares his secret and offers his help. Thus, Leo flies around the city providing intel to the cop and his journalist friend in the streets, hoping to thwart the computer attack.

It’s a film that falls firmly on the kid/adult line, and should prove entertaining for both. The animation is charming, tapping old-school and European styles, while proving quite evocative. The scenes of Leo flying around New York City are quite wonderful. (Note for sensitive kids: The film has a fair amount of violence, such as guns and explosions, and the emotional intensity of a family dealing with a child who has a potentially fatal illness.)