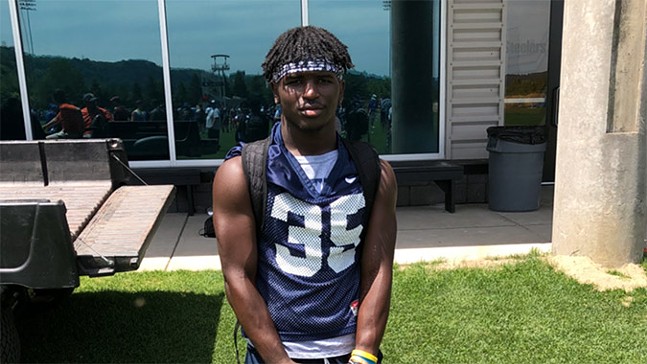 Courtesy: Change.org
JD Younger
This week, JD Younger called out his high school for a rule in its handbook that bans braids, locks, and twists at Pittsburgh’s Central Catholic High School. He told WPXI that the rule is "outdated" and unfairly targets Black students.

Since making the story public, Younger has started a petition on Change.org and has received thousands of signatures. Yesterday, the petition had about 3,800 signatures. Today, as of print, it’s up to more than 8,400.

“This is a Christian Catholic institute. Is God going to deny me because I have dreads, plaits, or twists?” said Younger to WPXI.

According to a press release from Change.org, another Pittsburgher, Dante Alexzander, said the rule “targets the African-American students more [than] anybody seeing as that mainly African-Americans wear their hair in dreads, twists, locs, etc.”

Central Catholic is a private high school for boys located in Oakland. The school's website says its goal is to foster “a life of faith and learning that develops leaders rooted in the Gospel values of integrity, respect, service, justice, and peace.”

According to Central Catholic's handbook, “Hair must be its natural color, clean, neatly combed, not totally covering the ears or eyes, or falling below the shirt collar. Sideburns may not extend below the ear or extend forward toward the cheek. Shaved heads or hairstyles with designs, patterns, lines, weaves, spikes, braids, locks, twists, or ponytails are not permitted. Closely cut sides and top (military style) are permitted. Hair shall not exceed 2 1/2 inches from the scalp.”

Central Catholic principal Tony Baginski issued a statement to WPXI that read: “Our Student / Parent handbook covers a wide range of policies and procedures. As a private, Diocesan high school, Central Catholic enforces a dress code, which includes policies on hairstyles and facial hair. Students and parents agree to abide by these policies when their son is enrolled at Central Catholic, and they sign a Memorandum of Understanding at the beginning of each school year. The dress-code requirements are all-encompassing, and are not intended to single out any one individual.”

Younger is a football player at Central Catholic, and he joins other high school athletes to call out hair-style bans. In Chula Vista, Calif., a student criticized a similar hair ban, and the school reversed its policy this week.