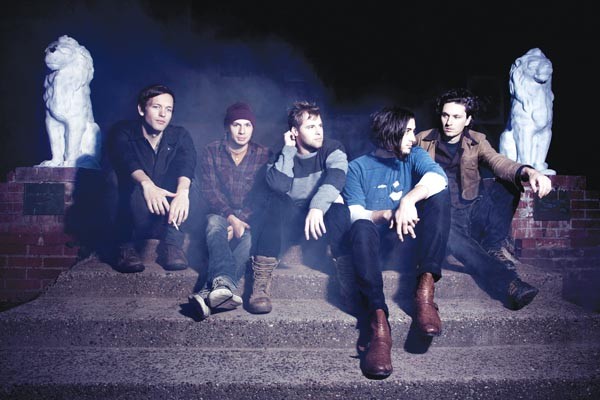 with THE HARLAN TWINS, DJ set by TM EYE.

A first record is a milestone for any musician, but for David Bubenheim of Pet Clinic, it's a major stop on the journey to becoming a real band. "What is a band without a record?" he asks. "It's just a bunch of guys playing songs."

It's unlikely, however, that anyone would accuse Pet Clinic of not being a real band. It has established a presence by playing almost every show it has been offered, and The Dust That Made the Fire That Made the Light, the six-song vinyl EP it will release on Feb. 11, represents roughly two years of hard work.

Bubenheim — Pet Clinic's singer, guitarist and generally acknowledged leader — is not a stranger to either hard work or record releases. In the White Stripes-influenced minimalist blues-rock duo Br'er Fox, Bubenheim and his brother Aaron — now a member of Meeting of Important People — both played guitar and drums, and sang. Together, they worked their way up from playing the empty back rooms of mildly unsavory bars to releasing their record, The Bitter Struggle With Duality, while sharing the bill with Tapes 'n Tapes at Brillobox.

The brothers' musical collaboration began when David was about 14, and Aaron — then in his early 20s — was severely injured in a car accident, and had to spend several months at home. Despite an age difference of almost a decade, the two were close, and as Aaron began to recover, he and David started playing music together.

"We didn't have a clue about music," Aaron explains via email. "But it was a good thing, in a way, in that we weren't afraid of any conventions back then. We loved music in a very primal and visceral way. [The] songs we wrote, I think, were very honest and we kinda didn't care what anyone thought."

David recalls listening to Aaron's Red Hot Chili Peppers and Stone Temple Pilots cassettes, and later discovering bands like The Strokes and Modest Mouse together. "My brother taught me everything," David says.

But that Brillobox show with Tape 'n Tapes turned out to be Br'er Fox's last. Aaron wanted to concentrate on Meeting of Important People, and David, taking a step toward making music with a bigger sound, started drumming with bedroom surf-rock band Landline.

Meanwhile, Bubenheim, along with guitarist Mike Arendt, a friend from high school, began discussing plans for Pet Clinic. He was introduced to drummer Kenny Nelson, who was a natural fit. "I couldn't believe it," Bubenheim says of the first time he and Nelson jammed. "He was the best drummer I'd ever played with."

Keyboardist John Henderson approached Bubenheim after seeing Landline play as part of the annual open-art show Art All Night. He asked for Bubenheim's number, saying he wanted to get involved with whatever he was working on. Henderson left several messages over the next few weeks, and Bubenheim — slightly weirded out — didn't return his calls. "Then he left me a message and said, ‘This is the last time I'm going to call you, call me back or I'll never see you again,'" Bubenheim recalls with smile.  "He ended up being one of the most interesting people I've ever met."

Henderson extends his engaging nature to the Pet Clinic sound: He runs his keyboard through a Leslie rotary cabinet, which adds a strange ethereal layer to the otherwise straightforward rock. As Nelson puts it, "If you hear a sound on our record and you don't know what it is, it's probably John."

Pet Clinic's already unwieldy formation story gets even more complicated when it comes to bass players, of which it has had several. Ian Edwards currently holds the position, though Alec Mundy plays bass on the record. "[Mundy's] bass playing solidified the Pet Clinic sound for me," Arendt says. Mundy added a "punky, chunky element," which Edwards adopts in some places, though on newer songs he offers something closer to a 1970s groove.

Pet Clinic's very first show was a battle of the bands at Pitt, sponsored by WPTS and judged by the members of another blues-rock band, Modey Lemon. Pet Clinic won, and received free recording time at Machine Age Studios, in Polish Hill. "They just had a good presence" says Modey Lemon bassist Jason Kirker. "They definitely have a Detroit, big-rock sound."

Along with Joe Bartolotta of Machine Age and Jake Hanner of the band Donora, Kirker later helped record The Dust That Made the Fire That Made the Light. "They're really focused, they're really serious about it," he says. "They had a nice, raw sound and I kind of expanded on that. I didn't really want to produce it too much."

The record invites comparisons that shift song by song, moment by moment. ("My dad listened to it and said, ‘Wow, when did you get six voices?'" Bubenheim says.) On the jolty opening track, "Stop Wasting My Precious Time," Bubenheim channels Frank Black with an unhinged yowl. "Alaskan Plates" sounds a bit like Ian Curtis singing for The Strokes, and "Coming Night" is Jack White worship by way of Richard Hell. Lyrically, the record veers toward the youthfully dramatic, but also deals with some heavy subjects, like society's tendency to overmedicate. The entire record is drenched in loud, dirty-rock fuzz. "People compare us to grunge bands," Nelson says, "but it doesn't sound grungy. It sounds dirtier than grungy." Bubenheim, quite frankly, doesn't care what you think it sounds like. People hear what they want to hear, he says, "and it doesn't change what it is or that we made it."

Ultimately, though, Pet Clinic manages to sound like Pet Clinic. "Looking back, I recognize that Dave was moving in the direction of Pet Clinic before Br'er Fox ever broke up," brother Aaron notes. "[He] wanted to take the music up and up, louder and more intense."

Currently, most of the band members share a house in Troy Hill; Henderson lives just down the street with the guitarist of Landline. "It's a nice little community," Bubenheim says. Nelson jokes that he hates their living situation: "Sometimes it's an oversaturation of awesomeness. We're constantly feeding off of each other's creativity. It's hard to sort out all the ideas that are coming from everyone."

Adding to that little community, the band is also surrounded by talented friends and well-wishers who help with things like album art and T-shirt design. It's easy to see why people are drawn to Pet Clinic: Its members practically radiate fun and a spirit of invention for the sake of invention.

Aaron explains it this way: "It's a kind of purity that everyone in the room can sense when they play a song. You can't mistake it, and you cannot fake it in any way.  I have no idea what it really is, it's not tangible. But needless to say, I think that Pet Clinic has that thing."