Pesticides, Tadpole Tails and You

"We are concerned about [the study results] because we and amphibians have a lot of the same hormones." 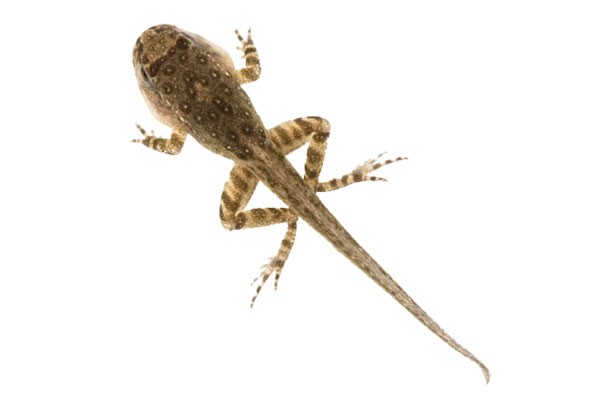 Pesticides and amphibians don't mix. Indeed, studies have shown the combination to be lethal. Many scientists believe that pesticide exposure, along with habitat loss and disease, are responsible for huge declines in amphibian species worldwide.

But a new study by University of Pittsburgh biologist Rick Relyea has found something perhaps even more disturbing: When exposed to the world's most widely used herbicide — the weed-killer Roundup — frog tadpoles actually change shape. The finding is a warning signal for humans as well as frogs.

Relyea, director of Pitt's Pymatuning Laboratory of Ecology, is renowned in his field. "He's certainly one of the, if not the, top researcher right now in amphibian ecotoxicology," says Kevin Zippel, director of international conservation nonprofit Amphibian Ark. And Gary Fellers, a California-based research biologist who studies amphibians for the U.S. Geological Survey, calls Relyea's new finding "potentially really important" in charting how chemicals affect vertebrates.

The study, published in March in the journal Ecological Applications, resulted unexpectedly from Relyea's effort to confirm lab results about Roundup's lethality in a more natural setting. When possible, Relyea does experiments outdoors, in simulated ponds called "mesocosms": 200-gallon plastic tanks filled not with lab water but with well water, algae, plankton and leaf litter. Some experiments expose tadpoles to predators, such as larval dragonflies.

Using mesocosms, for instance, Relyea had previously shown that even when the pesticide malathion doesn't kill tadpoles directly, it starves them by killing zooplankton, the microscopic animals that are a key link in the tadpoles' food web. And he demonstrated that endosulfan — a pesticide the U.S. Environmental Protection Agency called safe — was fatal to tadpoles exposed to it for longer than the EPA-standard four-day test period.

This latest study yielded two big surprises. One concerned mortality: In the lab, tadpoles exposed to both Roundup and predators died in higher numbers than those exposed to just Roundup, likely because of additional stress. But in the mesocosms, tadpoles exposed to both Roundup and predators were less likely to die. The likely reason is that the mesocosm water is deep enough to stratify by temperature: Tadpoles escaping predators fled into the deeper, cooler layers, while pesticides remained up top.

Even more surprising was a result Relyea just happened to notice. It's known that tadpoles grow larger tails when exposed to a scent other tadpoles emit when they're being eaten by predators: It's a survival mechanism that helps them swim better. But Relyea found that leopard-frog and wood-frog tadpoles exposed to Roundup grew larger tails even when predators were absent. Sometimes the tails even turned red, just as if predators were about. The shape-change also results in tadpoles growing smaller bodies. Relyea believes his is the first study to show a pesticide changing the shape of a vertebrate. (Other studies have shown similar effects with invertebrates, like certain freshwater crustaceans.)

What's going on? Predator presence grows tadpoles' tails by affecting stress hormones. And some man-made chemicals, certain pesticides among them, can mimic or activate hormones. Indeed, fish in Pittsburgh's rivers, and other urban waterways, have been found with both male and female sex traits — like eggs in their testes — likely because of pharmaceuticals and other hormone-disrupting chemicals found in sewage.

Relyea hypothesizes that Roundup is somehow activating tadpole stress hormones, just as predators do. Fellers, the U.S.G.S. researcher, calls that hypothesis "quite plausible."

Why does it matter? One-third of amphibian species worldwide are threatened with extinction, says Amphibian Ark's Zippel. Fewer amphibians means, among other things, more of the insects on which they feed, including mosquitoes.

And don't forget: People are vertebrates too. "We are concerned about [these study results] because we and amphibians have a lot of the same hormones," says Relyea. "If the [shape changes] with amphibians are because the herbicide is affecting the amphibians' hormones, then we have to start figuring out, ‘What is it affecting, and could it have the potential to affect humans as well?'"