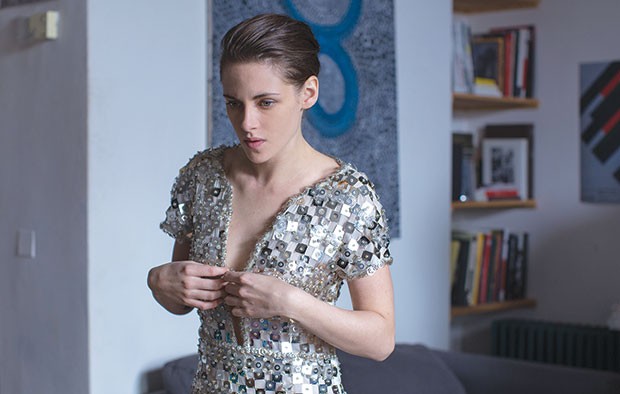 In Olivier Assayas’ offbeat thriller Personal Shopper, Maureen (Kristen Stewart) is an American woman working in Paris as a personal assistant for a celebrity. Most of this sucky job entails securing free garments and accessories for her client to wear to events.

In her spare time, Maureen is an amateur medium, and hangs out at a country house her recently deceased twin brother owned; they had a pact to send a signal from beyond, should one of them die. But the nights spent in the big, gloomy house are not sealing this deal, despite the hopeful frisson of creaky floors and unhinged doors.

But then Maureen gets a barrage of text messages from an unknown number. The messages are somewhere between creepy and playful, and over the course of a couple of days, the texter prompts Maureen toward risky behavior and (likely overdue) self-examination. It could be a person, but the breadth and intimacy of the mystery texter’s knowledge suggests something super-human. “Are you a ghost?” Maureen texts, to no reply.

There is an astonishingly long sequence in this film that is just Maureen and her iPhone, sending and receiving texts, and reacting. Possible ghosts aside, it’s a précis of the fraught nature of texting. These are the words unmoored from emotional intent, inflection and other useful cues (the opening parry — “I know you” — could be flirty, sincere or threatening). Layer on the stress of waiting for replies (curse you, pulsating ellipses), and the internal debate over how, or whether, to respond. Stewart is great throughout the film, but this extended silent scene gives the actress prone to twitchy intensity and hard-edged vulnerability plenty of satisfying exercise.

Assayas’ film is slowish, and lacking in standard plot beats. It’s partly a ghost tale, partly a downbeat character study and maybe even a dig at lifestyles of the rich and famous. Beyond the supernatural, this is an exploration of loss, grief and learning to move on. While there might be a supernatural ghost, Maureen herself moves through the world like a ghost: unseen except as a conduit for her famous boss. (Is it any wonder she seeks agency in trying on the boss’ clothes?) Her young life should be brimming with potential, but Maureen is held down by the past, loneliness and a lack of goals.

It’s left open-ended whether there are ghosts, and what, if anything, might happen. Not for nothing is this film bookended with scenes depicting Maureen alone and confused in empty and isolated houses. But like a possible sighting of a ghost, you may find yourself pondering it all long after the light has faded.