Anyone curious about life in Iran during the revolution of 1979, and since, would do well to visit Marjane Satrapi's world. The graphic novelist's autobiographical Persepolis chronicles her childhood and youth in Tehran and schooling in Western Europe

Originally released as two books, and the basis for an acclaimed animated film in 2007, Persepolis follows Satrapi from her only-childhood with her beloved and politically active parents and grandmother through her experience as a young, divorced expatriate.

Satrapi navigates universal travails of girlhood like growing into a woman's body and wondering about sex and love against a strikingly historic background. The shah is overthrown, but a repressive autocratic theocracy takes over. Women are forced to wear hijab, and niceties like wine and parties are pushed underground.

Her affluent parents eventually send her to Austria, where she won't face arrest for wearing a Michael Jackson pin or running so that her rear end jiggles visibly. She pines for a home that is churning with unrest. When she returns, it's no longer home.

Today, living in Paris, Satrapi has said that no place is truly hers anymore.

Satrapi has also written a children's book, Monsters Are Afraid of the Moon; an account of the last days of a relative's life, in Iran in 1958, Chicken With Plums; and a hilariously raunchy and heartbreaking account of an afternoon of tea and sex chat with women in her family, Embroideries. All feature her straightforward and inviting drawing style.

Comparisons to Art Spiegelman's Maus series are frequent and inevitable. Spiegleman's groundbreaking graphic novels used anthropomorphic mice to depict the horrors of the Holocaust. Satrapi has said that while she's honored by the comparison, she could see Speigelman being annoyed -- every young graphic novelist, after all, gets compared to Spiegelman. In an interview with Bookslut, she said she once phoned him to apologize and to note that the comparisons weren't coming from her, touching off a friendship between the two.

It would be easy to consider Satrapi a feminist -- her novels, other than Chicken and Plums, center on women and their experiences -- but she has rejected the label. While making the case for equality and decency between the sexes, in interviews she has called herself a "humanist."

Everyone in her stories, male and female, has positive and negative traits. Her adored, jasmine-filled-bra wearing grandmother, we learn in Embroideries, was awfully nasty before her morning dose of opium. And a mullah administering an ideological school-entrance exam passes her even when she gives the "wrong" answer to a question about the sinfulness of women's hair: A flippant young Satrapi says God wouldn't have made it if it was so bad, and the mullah admires her honesty.

Satrapi's gift is illuminating history and revealing cultures in simple ways -- anyone can relate to romantic heartbreak, youthful awkwardness and rocking out to "Eye of the Tiger," whether they grew up in Tehran or Topeka. 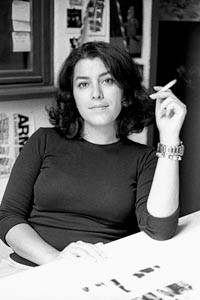