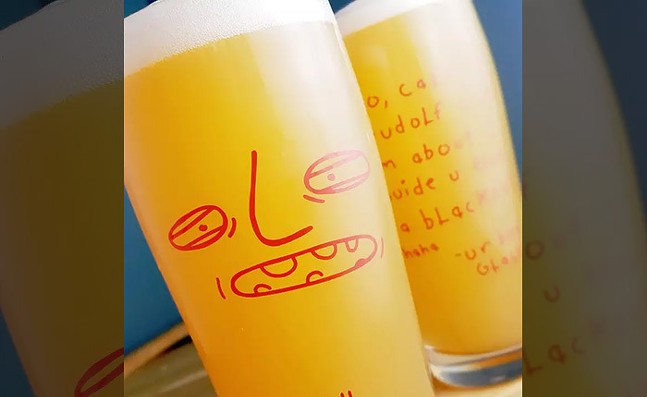 A now sold-out Permanent Hangover 'ur boy glassy" product
The Instagram comments are flooded with disappointed but loyal customers, lamenting about missing out on the chance to purchase a St. Patrick’s Day-themed pint and shot glass combo emblazoned with “Lovely Day to Piss in the Street” and “Let’s Get Fucking Shamrocked — ur boy glassy.” It’s just another day in the life of Permanent Hangover.

Launched in 2017 by Pittsburgh artist Andy Godish and local bartender/craft beer veteran Cam Bosch, Permanent Hangover is a Pittsburgh company selling offbeat and apathetic-themed custom illustrations and designs on clothing and items like beer glasses and koozies. Anytime a new series is announced on their Instagram page, which currently boasts over 21,000 followers, the products often sell out in minutes.

The company originally started as something of an ironic wink from inside the craft industry and has since turned into one of the most creative art projects coming out of the city. Breweries across the country seek out Permanent Hangover to collaborate, and they’ve cultivated a cult following that most brands can only dream of.

“I started it as a side experiment, really to see how large I could grow an Instagram account,” says Godish. “I pivoted a few different times, and eventually started to draw my own stupid stuff about the craft beer scene, and pretty early on, Cam DM’d me to get involved.”

It may have started humbly, but it didn’t stay that way for long. Bosch used his brewery connections from his time in Massachusetts and a stint as one of the first employees at longtime staple Bissell Brothers to introduce Permanent Hangover to the world via a brewery pop-up tour, from the aforementioned Bissell to the iconic Trillium Brewery. The feedback was immediate.

“We did that first tour and realized pretty quickly the demand for custom glassware. It just resonated really strongly,” Godish says. “And it helped establish the brand at a high level right out of the gate.”

Photo: Courtesy of Andy Godish
Permanent Hangover artist Andy Godish
It continued to grow from there. Their flagship design, “ur boy glassy,” became a must-have for a lot of beer fans. People started seeking out their products every time something new dropped, a natural extension of the hype side of craft beer, where trading through Instagram comments and shipping new releases across the country is the norm. They built the brand organically, relying on legitimate word-of-mouth promotions and a focus on slow and deliberate growth over flooding the market.

“Even with ‘glassy,’ we’ve been very purposeful of our use of that character and tried not to overdo it too much,” says Godish. “We don’t want to have people get sick of it, while also meeting demand so people don’t get discouraged.”

Permanent Hangover could have become an easily dismissed fad for craft beer snobs, or taken over and co-opted by frat culture. But Godish and Bosch avoided being pigeonholed by committing to an overall theme in their designs of malaise and world-weariness instead of catering to one specific audience.

“We’re trying to more appeal to beer drinkers and people who have an apathetic outlook on life,” says Godish. “We did our first collaboration with an artist, Matt Gray, and we want to branch out and do more with artists that fit the brand vibe but aren’t necessarily in craft beer.”

Part of Permanent Hangover's Thirsty Pines Leisure Club line
That consciousness of how the brand is viewed informs everything that Permanent Hangover is doing to build for the future. They’ve just launched a line of golf wear, aptly named Thirsty Pines Leisure Club, that is instantly recognizable as their own, yet opens a door for potential new customers.

After that, the ideas become even larger but no less calculated. Godish and Bosch are able to joke about the absurdity of it all, without ever losing focus of where the business can go. It’s a product showcasing a haphazard, chaotic lifestyle, run by two people who think in anything but those terms. There is as much talk of margins, supply and demand, and the intricacies of marketing strategy as there is of drinking a lot of beer.

So what’s next? A lot really, although not enough yet for Godish to make it a full-time gig.

“I have a pretty good gut, and I think I’ll know when that time is,” he says. “I keep thinking it’ll be at a point when things are going so well that I have no choice to go full-time, but I honestly think it might happen at a point where it’s going down, and I give it my all to make it work.”

Until that time, the first step is a new headquarters right in the heart of Lawrenceville, which will serve as a home base for shipping and logistics, although as of now Godish says it’s “just a Pittsburgh basement.” But that basement might eventually become something more extensive.

On April Fools Day, Godish and Bosch posted that they’d be opening a Permanent Hangover taproom and bar as a joke, but so many friends and family took it seriously that they’re considering making it a reality in the future. They’re picturing an intimate bar, stocked with some of the best beer in the country and exclusive Permanent Hangover merch.

However, their biggest undertaking this year will see the light of day around the holiday. For a while now, Godish’s passion project has been a first-of-its-kind Permanent Hangover board game. While mixing board games and drinking games has become a millennial staple, his plan is to take it one step further, creating an interactive game where the game pieces are taster glasses, the gameplay centers around taking drinks and challenges, mixing classic strategy games with trademark Permanent Hangover weirdness.

“Trying to develop a board game is way more of an undertaking than I expected,” Godish jokes. “I got all these game development books and have been trying to create something that has the highest replay value possible.”

With a mission statement “Tomorrow will be better,” Permanent Hangover connects to the apathetic, to the slightly inebriated (OK, maybe a little more than slightly), and, yes, they have a deep love for craft beer. But the company has also become a brand to be reckoned with through a distinct style, and a creative vision that promises to keep putting them on the rise, regardless of the direction they end up taking.