This work is especially poignant alfresco. 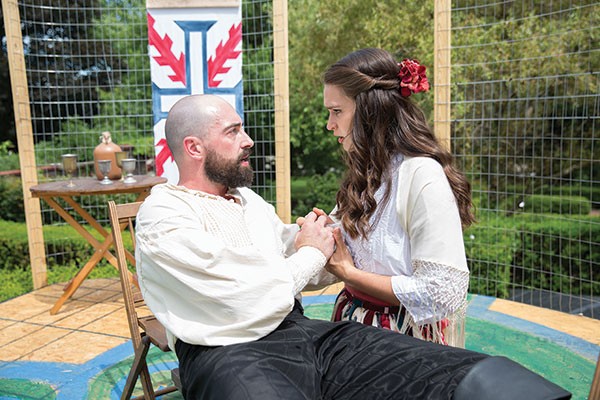 For some reason drama, like dining, is always vivified when experienced outdoors.  This is certainly the case with Quantum Theatre’s production of Peribáñez, performed in the Rose Garden of Mellon Park. There’s something transformational about such a setting, where natural humidity and crickets replace the air-conditioning and smoke machines of so many contemporary indoor shows. And like a fine culinary pairing, this work, by the brilliant and prolific 17th-century Spanish playwright Lope de Vega, is especially poignant alfresco.

The set is built into the garden’s steep hillside, and one has to admire the stamina of the actors bounding up and down the stairs. Britton Mauk’s simple wood-and-chicken-wire stage — divided into three sections and thrust into the audience — lends a medieval dimensionality appropriate to the play’s 15th-century context. And almost defiantly, the sophistication of C. Todd Brown’s lighting enables startling scene changes and effects that concede nothing by being outside.

The story examines what happens when the love of two young peasants is disrupted by a conniving nobleman, and whether honor can be equated with the status of class.

Co-directors Megan Monaghan Rivas and Tlaloc Rivas create inspired staging that lets the characters switch instantly from interior monologue to external dialogue without affectation. Particularly moving is the cinematic juxtaposition of the princely Commander (Mike Mihm) and the object of his obsessive lust, Casilda (Isabel Pask), as he conjures her from memory and literally wills her apparition into existence on the opposite wing.

Lope de Vega does not make it easy to judge who the moral hero is: the interloping Commander, or the vengeful Peribáñez. Someone must die in the end and, without giving away whom, it is interesting that the character traditionally stabbed in the back is stabbed in the front. This certainly deepens the chill of a dish best served cold.