Performance artist Hetain Patel checks out the scene At Home.

Patel examines starry-eyed idealism and converts it into something achievably romantic, human and, in the very best sense of the word, mundane.

The scene at the beginning of “The Jump,” one of the works of video included in Hetain Patel’s exhibition At Home, at Wood Street Galleries, is one we recognize. Your Friendly Neighborhood Spider-Man is crouched, his location unidentifiable but familiar. He’s surrounded by blackness; softly lit blue-gray smoke floats in clouds behind him, and a score moodily grand seems to propel him. We supply the missing context with minds programmed to fill in the blanks based on our prior experience of the web-slinger and set him atop a building, in a city, at night, protecting. The music wells and roils, ponderous and in sync with his slow motion, and he sinks deeper only to push himself back up, centimeter by centimeter, then, finally, to take flight.

Childhood daydreams often revolve around heroism, whether enacted by a mysterious, masked crusader or by a sword-wielding warrior. They’re romantic in a cinematic way, fantastical and impossible. In At Home, Patel examines this starry-eyed idealism and converts it into something achievably romantic, human and, in the very best sense of the word, mundane — within the grasp of ordinary men, and honestly, stunningly, real. The show, part of the Pittsburgh Cultural Trust’s India in Focus festival, is the U.K.-based performance artist’s North American exhibit debut.

Just a trio of videos and a handful of photographs comprise the show, but their impact is gigantic. “To Dance Like Your Dad” documents on split screens Patel’s father, performing his duties in the daily operations of an automotive factory, then Patel himself, duplicating the man’s actions and words, exploring how the mannerisms and characteristics of the former are passed down to the latter. All of the photographs in “Eva” feature the artist’s wife —  as portraiture not of her, but rather of who she is in terms of his identity. Her nude body serves as canvas, decorated with henna, with the text of a love letter, a dialogue on marriage with quotes from Bruce Lee, and the cover of an issue of The Amazing Spider-Man. 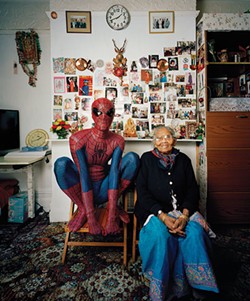 Hetain Patel, as Spider-Man, in the London home of his grandmother
“The First Dance” rounds out the trio of videos. It’s the most complicated of the three, with up to six screens concurrently projected; the most elaborate, possessing choreography and costumes; and the most moving. It begins with preparation, Eva pinning on scarves in front of a mirror, Patel setting up cameras on the sidewalk, words on technicalities and set-ups and framing between the two as they ready for the big performance. When all is a go, Patel replicates a sequence of movement from Crouching Tiger, Hidden Dragon, the 2000 Ang Lee blockbuster that introduced many American viewers of mainstream cinema to the martial-arts action film and the traditions of wuxia. While Patel channels Chow Yun Fat, replacing his sword with a yardstick and executing maneuvers learned from repeated viewing, Eva stands in for Michelle Yeoh, watching. Outside their home, Eva gazes at her husband from the doorway while he performs kung fu in his wedding sherwani in a south London street as passersby hurry past and pretend not to notice. It’s endearing, funny, charming and strangely beautiful, not only as a work by Patel but as a document of their marriage, a product of a joint effort between husband and wife that is simultaneously a love song from husband to wife.

Collectively, these pieces form a thoughtful and earnest meditation on love, home and the journey from the family that created you to the family that you create, growing and refining the hopes of youth — mythological, wild and epic — to the accomplishments of adulthood: responsible, devoted and grounded. The childhood dreams aren’t abandoned, but refined and made practical, recasting that which is “super” from a staple of fiction to the domain of a man solidly rooted in reality.

As seen at the conclusion of “The Jump,” the wall-crawler soars through the air, soundtrack swelling, then peaks and begins his descent. When his Spandex-clad feet hit the ground, they don’t touch down upon the asphalt of an urban street, cobblestones of an historic district or wet pavement of a darkened alley. They strike carpet, its patterns the geometric forms of flowers and leaves, with soft hues and gentle shapes. It’s the living room of Patel’s grandmother’s house in Britain, a house that has at one point or another been a home not only to Patel himself but to all of the relatives that have immigrated there. The hero here is a household one, and the ending happier than Hollywood could ever manufacture.