The 99-cent bottles of Fireball were the top-selling product of the PLCB, growing more than 272% since the past fiscal year. Apparently, you can now get the 50-milliliter bottles as part of a “Party Bucket” which includes 20 mini-bottles in a bucket. According to the PLCB website, the bucket cost $19.99, which is actually 19 cents more than if you just bought 20 mini-bottles on their own.

CP photo: Lisa Cunningham
Think the Fireball Party Bucket looks half empty? Make sure you read the lid: "We've left plenty of room for ice ... fill 'er up"
(Also, people, just buy a big bottle. It’s better for the environment and the 1.75 L bottle and the 3.5 L “Firebox“ are better deals. If you’re having a party either way, people can just pour a shot if they want to.)

The Pittsburgh area might enjoy Fireball, and drinking in general, more than anywhere else in the Keystone State. More than $309 million was spent at liquor stores in Allegheny County in the 2018-19 fiscal year. That’s almost 14% of all statewide liquor store sales. This even outpaced Philadelphia, which has a bigger population than Allegheny County by more than 300,000. 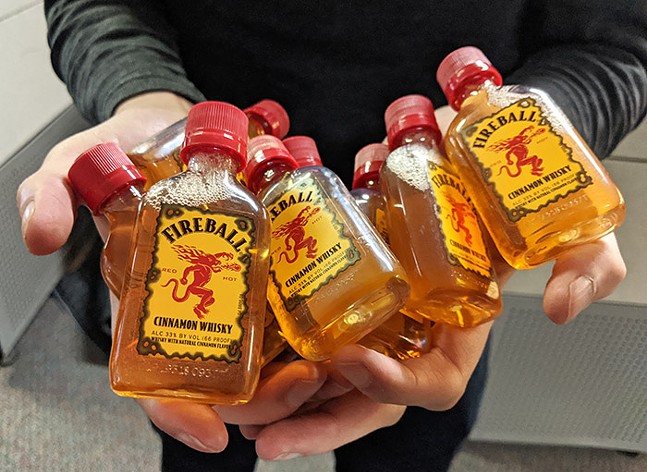 CP photo: Lisa Cunningham
Fireballs for the entire office!
Whiskey sales were also tops in Allegheny County, tallying more than $59 million, and was the top-selling category, just ahead of red table wine. And in nearby Armstrong County, whiskey was extremely popular. It made about 30% of the small county’s liquor sales, well more than any other spirit or wine.