"When states have to balance budgets, the first thing they cut is higher education." 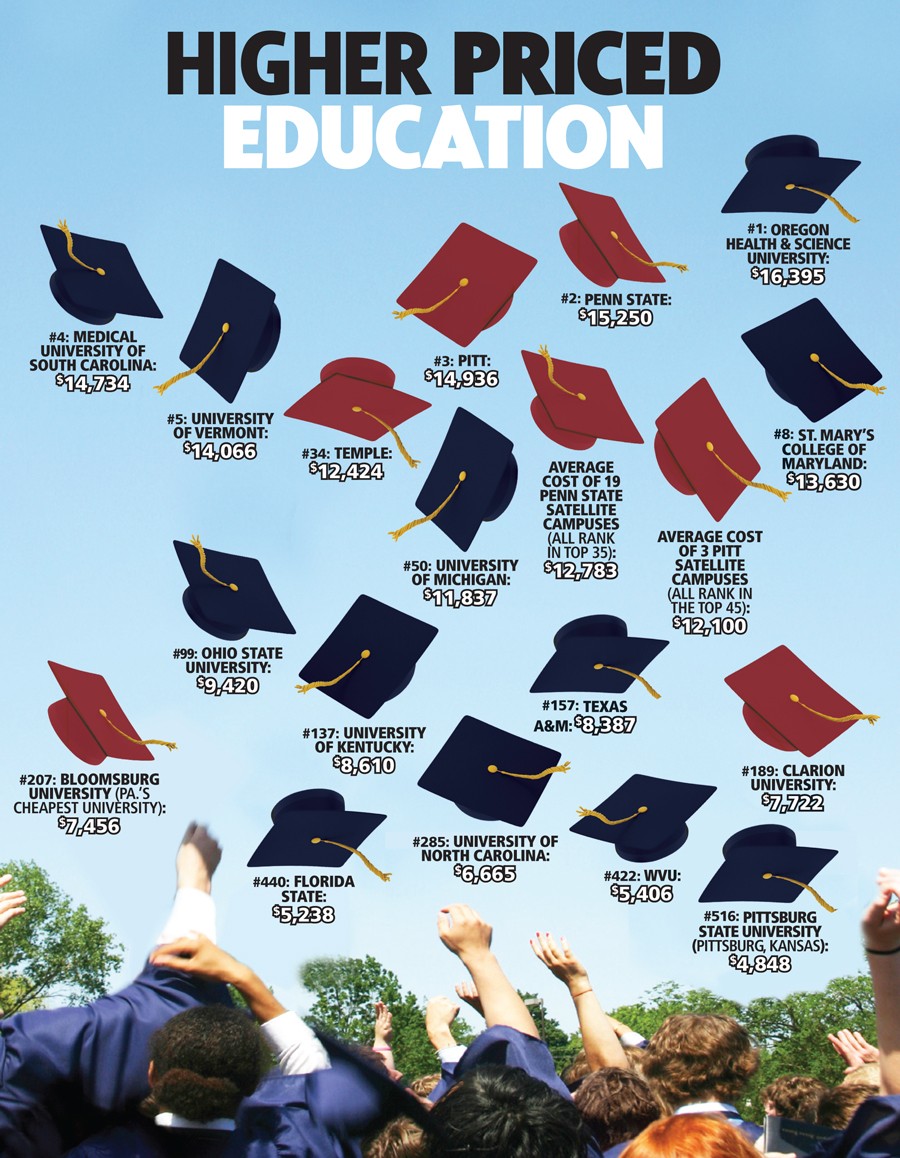 Source: 2010-2011TUITION RATES AS REPORTED BY U.S. DEPARTMENT OF EDUCATION

It probably comes as no surprise — especially to college students — that Pennsylvania's flagship universities are among the nation's most expensive. Penn State University's main campus, for one, has long been among the priciest taxpayer-supported schools in the U.S. But as officials in Harrisburg gear up to cut higher-education funding yet again, it's worth noting that even smaller institutions — like Clarion University — cost students more than some of the best-known schools in the country.

In a side-by-side comparison of tuition for in-state students, each of Pennsylvania's 41 public universities ranks in the top third of the nation's 663 state-supported colleges. In fact, of the country's 35 most-expensive state schools, 23 are based in Pennsylvania — and 20 of those are part of the Penn State system.

The numbers are based on 2010-11 tuition rates, and come courtesy of The Athens News in Ohio, which requested the data from the U.S. Department of Education. According to that data, all but 13 Pennsylvania schools are higher than the $8,244 national average for in-state tuition, as reported by the College Board. In some cases, the tuition is much higher than the average.

Penn State's $15,250 in annual tuition made it the second-most expensive state-supported school in the country last year, behind only the Oregon Health & Science University. The University of Pittsburgh finishes third, with a tuition bill of $14,936. But Penn State's satellite campuses are also pricey, starting with the $13,250 tuition at its Altoona campus. Pitt's four-year satellite facilities — located in Johnstown, Greensburg and Bradford — are also in the top 50. Average tuition for in-state students: $12,100.

The state does offer some less-expensive alternatives, but even those are in the top third nationwide. Clarion University's $7,722 tuition ranks 189th among the 663 public schools; Indiana University of Pennsylvania ranks 199th with a cost of $7,571. Pennsylvania's cheapest school, Bloomsburg University, ranks 207th at a cost of $7,456 per year. [See complete state list, page 8]

Students in other states fare much better. At West Virginia University, for example, in-state undergraduate tuition is $5,406. At Ohio State, it's $9,420. In Florida, where tuition bills are among the nation's lowest, tuition at Florida State costs only $5,238.

Mark Kantrowitz, a college-finance expert from Cranberry Township, says no one should be surprised at the price of Pennsylvania schools. Last year, Harrisburg balanced its budget in part by cutting higher-education support by 19 percent — and schools were hurting long before then.

"This is nothing new," says Kantrowitz. "State appropriations to universities have been declining on a per-capita basis for the past 40 years. When states have to balance budgets, the first thing they cut is higher education. When that happens, schools have to make up those funds. And one of the first things they do is raise tuition rates."

Nor is the picture likely to approve: In this year's budget negotiations, Gov. Tom Corbett has proposed cuts of up to 30 percent. "It's not that I'm against Pitt or Penn State or Temple ... but I don't have the money," Corbett told a gathering of state township officials in Hershey May 7, according to the Pittsburgh Post-Gazette.

But state Rep. Matt Smith (D-Bethel Park) says the state has to address rising college costs sooner rather than later.

"My concern is that with lack of state support the institutions on the other end have to make up for it with higher tuition cost," says Smith. "That will price a lot of students and families out of the ability to attend these great colleges."

At least Pennsylvania students won't be alone. States across the country have balanced the books by cutting higher-education funding. Even in Florida, the state cut appropriations by $300 million. (However, the governor in Florida also holds the power to block state-supported schools from hiking tuition, a power state officials exercised this year.)

"Sadly, cutting education is going on across the country," Kantrowitz says. "We need to actually invest more money into education instead of cutting it."

Lauren Daley contributed to this story.