Data from the 24th decennial census concludes that Pennsylvania will lose a congressional seat in the next reapportionment effort, U.S. Census Bureau officials confirmed Monday.

Pennsylvania is one of seven states to lose seats, along with New York, California, Illinois, Michigan, West Virginia and Ohio.

The Keystone state logged a reapportionment population (which includes overseas residents) of 13,011,844 and a resident population of 13,002,700.

U.S. Census Bureau population map
Despite a 2.4% increase in resident population, Pennsylvania could not beat out the growing population in other states to hold on to its 18 Congressional seats.

As the news of the data was announced, the National Democratic Redistricting Committee in Pennsylvania began calling for the elimination of north-central Pennsylvania’s sprawling 15th Congressional District.

The seat is now held by Republican U.S. Rep. Glenn ‘GT’ Thompson, the ranking Republican on the House Agriculture Committee.

“With Pennsylvania’s loss of population over the past decade, particularly in the central, northern, and southwestern regions, the National Democratic Redistricting (NDRC) strongly believes that the 15th Congressional District … should be eliminated. Given population shifts within the Commonwealth, eliminating the 15th district provides the best opportunity to minimize the impact on representation in surrounding districts,” the group’s Pennsylvania state director, Fernando Treviño, said.

“Currently, Pennsylvania law puts state legislators in charge of the redistricting process, which is, of course, a major conflict of interest. As we saw last decade, the congressional map that was drawn by Republicans in the legislature was one of the most egregiously gerrymandered in the country,” Treviño continued. “The Pennsylvania Supreme Court ultimately struck down that gerrymandered map, proving that a lawsuit can ensure fair and equal representation, but we should not have to rely on a lawsuit to get it. NDRC will do everything in our power to ensure that there is a fair and transparent process that results in maps where both parties must compete to win the support of Pennsylvanians at the polls.”

The national population now stands at 331,449,281 people. The national rate of population growth has decreased since from 9.7% in 2010 to 7.4% in the 2020 census count. Census officials confirmed that this is the second lowest rate of growth in U.S. history. 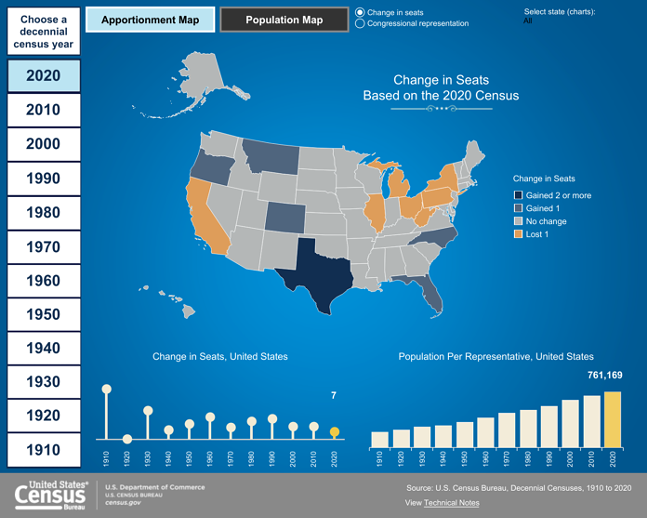 Despite the hurdles, U.S. Commerce Secretary Gina Raimondo told reporters in a briefing Monday that she transmitted the results of the state population count to President Joe Biden.

“I assured the president that the census was complete and accurate,” she said.

Dr. Ron Jarmin, acting director of the U.S. Census Bureau, told reporters that the bureau is “confident” that data is accurate and meets their high quality standards.

Redistricting data and population demographics will be released at a later date, the bureau confirmed.
Cassie Miller is a reporter with the Pennsylvania Capital-Star where this story first appeared.