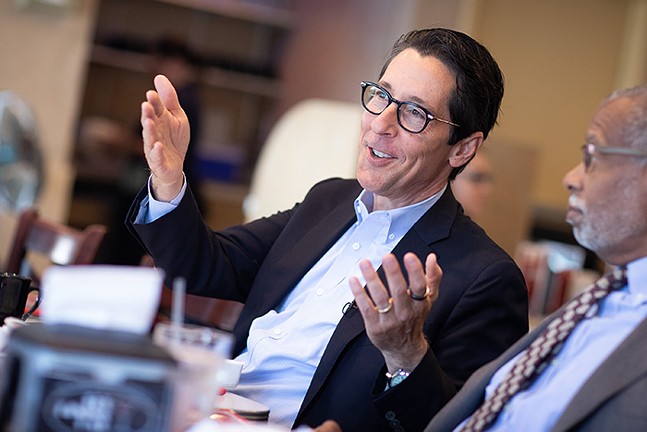 Photo: Courtesy of Pennsylvania Treasury
Treasurer Joe Torsella discusses retirement security concerns in Pennsylvania with employers and legislative partners in Philadelphia in September 2019.
Pennsylvania State Treasurer Joe Torsella has a pitch for the Keystone State. Well, two pitches. The Democratic incumbent treasurer from Montgomery County is running for re-election this year, so he obviously is asking Pennsylvanians for their vote. But he also understands how dysfunctional Congress has been, and how that is mirrored on the state level in Harrisburg.

With that in mind, Torsella’s other pitch is simple: pay attention to the state row offices like Treasurer, Attorney General, and Auditor General, and not just during election years. They can accomplish a lot for Pennsylvanians. “I’m trying to make an argument as dysfunctional as Washington is, and even the dysfunction that state capitals have, you can still get a lot more done,” says Torsella.

Last year, Torsella’s office sued several large financial firms for allegedly inflating bonds prices, and the companies settled with a payment of nearly $400 million to Pennsylvania. He also celebrated the creation of a statewide baby bond program, which he championed. Beyond state reforms, Torsella has also taken to using the state shares he manages to pressure large pharmaceutical companies to lower their COVID-treatment drug prices, and led a group of state treasurers in calling for Facebook CEO Mark Zuckerberg to resign as board chair of the tech giant.

All of these initiatives trace back to Torsella’s belief in the positive power of government. In an era where most politicians campaign on just how anti-politician, anti-establishment they are, Torsella is trying to instead restore trust in large, government-run institutions that are often the only things that can effectively fight corporations, combat economic inequality, and root out complex corruption.

“That is part of the reason the integrity issue is important to me,” says Torsella. “That is only something that large institutions can do.”

When Torsella was first running for state treasurer in 2016, he knew the office had a lot of power, but was mostly focused on bringing back some normalcy. Since the 1980s, three state treasurers have faced criminal indictments involving bribes and/or illegal campaign contributions.

“It can have a powerful purpose if someone has the right lens,” says Torsella. “You are the guardian of the literal two-word common wealth of the one-word commonwealth. But, I did not think about this when I was running. At some point along the way, I thought, ‘I can use their wealth to protect their interests,’ and I got more assertive about that.”

Torsella grew up in Berwick Borough in Columbia County in Northeastern Pennsylvania. He studied economics and history at the University of Pennsylvania, and then studied American history as a Rhodes Scholar in the U.K. Upon returning, he started his career in politics by serving as a deputy mayor under then Philadelphia Mayor Ed Rendell. As part of the Rendell administration, Torsella described the city’s financial turnaround as "taking control of the government and restructuring it for effectiveness," according to Buzz Bissinger’s book A Prayer for the City.

After working under Rendell, Torsella ran the National Constitution Center, a nonprofit dedicated to increasing awareness and understanding of the U.S. Constitution. In 2011, he was confirmed to serve as the U.S. Representative to the United Nations as an Ambassador, after being nominated by then President Barack Obama. 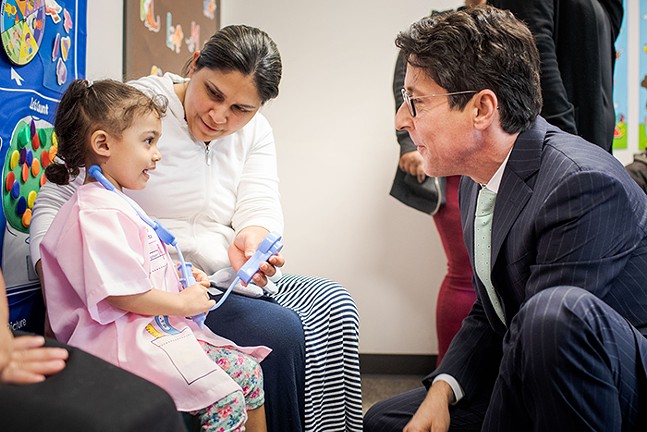 Photo: Courtesy of Pennsylvania Treasury
Torsella meets with children and their families of the Early Head Start program at Outreach - Center for Community Resources in Scranton, Lackawanna County in May of 2019 as part of the statewide launch of Keystone Scholars.
It’s easy to see why Torsella is bullish on selling government and large institutions as a force for good. And this feeling has only intensified as he has watched many Pennsylvania communities deteriorate over the years. For example, Torsella speaks positively about his childhood in Berwick. But the borough has been losing population since the 1960s, and its current poverty rate is around 20%.

Berwick’s story is like many former industrial and prosperous Pennsylvania towns and is currently struggling to regain its former glory. This kind of decline can lead to community ties breaking, and trust in institutions faltering.

“One of my most strongly held beliefs, and a lot of what is really ailing us now, is a deterioration in all the ties of community,” says Torsella. “So many different forces have severed us one from another, people are just at sea, the economic hardships become the driver.”

He says this goal of rebuilding a sense of community is what guides his decision-making in watching over the commonwealth’s money.

“The government bonds case is huge,” says Torsella. “I have been told by people that watch this stuff more, they have never seen an outcome that happened that quickly.”

Torsella is also proud of the creation of Keystone Scholars, which provides a $100 investment to all children born or adopted in Pennsylvania, and that money can be used for expenses associated with most trade schools, vocational programs, community college, and universities.

And Torsella has also made efforts to use Pennsylvania’s purse as a bully pulpit. The state invests more than $33 billion on behalf of state taxpayers, and as such, owns a significant amount of shares in some influential companies.

Last year, Torsella’s office sought to use those shares to speak at the Facebook board meeting and led a call, with five other state treasurers, for CEO Mark Zuckerberg to remove himself as chair. Torsella said then that Zuckerberg had too much power over the publicly-traded company as both CEO and board chair. He said Pennsylvanians were directly under threat by Facebook’s actions (or inactions) thanks to multiple efforts by Russian companies to influence Pennslyvanians in the 2016 election.

“It’s about standing up when we think Pennsylvanians are being taken advantage of,” Torsella told Pittsburgh City Paper in 2019. “We use the power of the purse when we can.”

More recently, Torsella is pressuring pharmaceutical giant Gilead to lower the cost of its COVID-treatment drug, remdesivir. The drug, which received about $70 million in U.S. government funds during development, costs patients between $2,300-3,100 for treatment. According to the Institute for Clinical and Economic Review, remdesivir only costs approximately $1 per vital to produce.

“There are other tools we are going to use,” says Torsella of these moves to use shares to pressure large companies.

Torsella says he is just trying to stick to advice his wife Carolyn gave him about his career. She told him, “Work where you are planted, and not wishing you were someone else.” 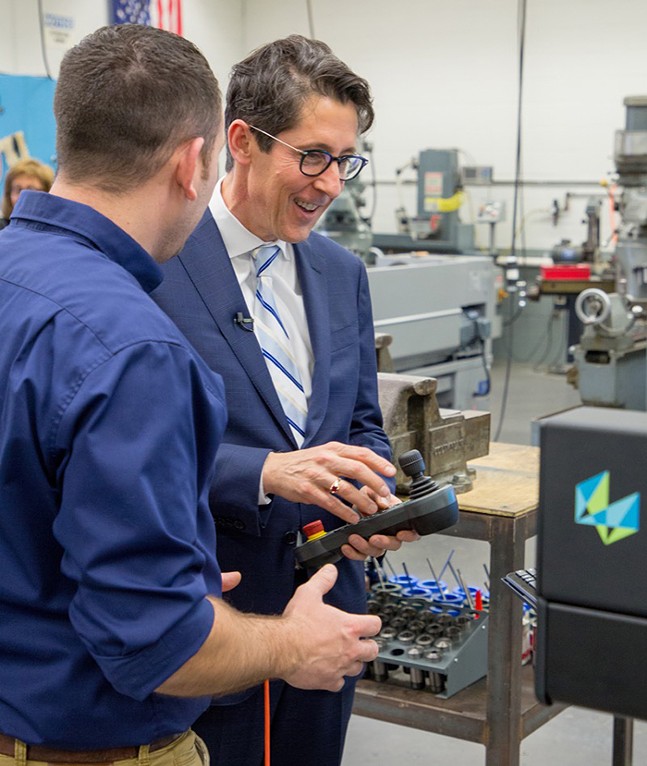 Photo: Courtesy of Pennsylvania Treasury
Treasurer Joe Torsella gets hands-on experience at Indiana County Technology Center in April of 2018 as part of the launch of the Keystone Scholars pilot program.
“Linear plans seem to work out pretty badly,” says Torsella. “For a lot of people who had the ABCDEF plan, it blinds you to the opportunities you have.”

However, his general election opponent, Republican Stacy Garrity, has criticized Torsella for looking to the future and not the present. Torsella’s name has been floated for a potential bid for higher office in 2022, like U.S. Senate or governor, especially after U.S. Sen. Pat Toomey (R-Lehigh) announced he would not seek re-election or run for governor.

“Joe Torsella is welcome to run for whatever position he wants, but he should be open and honest with Pennsylvania voters,” said Garrity in a statement on Oct. 5. “He should commit to fulfilling his term as a state treasurer if he wins, or he shouldn’t run at all.”

Torsella defends himself against these kinds of attacks, which are fairly typical for people holding Pennsylvania row offices. But he isn’t exactly shutting the door on another run for a larger office.

Other candidates for state treasurer this year include Timothy Runkle of the Green Party and Joseph Soloski of the Libertarian Party.

In the end, Torsella falls back on his education in American history as motivation to drive his desire to rebuild public institutions.