The measure passed in a 3-2 vote after two hours of calm, but pointed, debate. 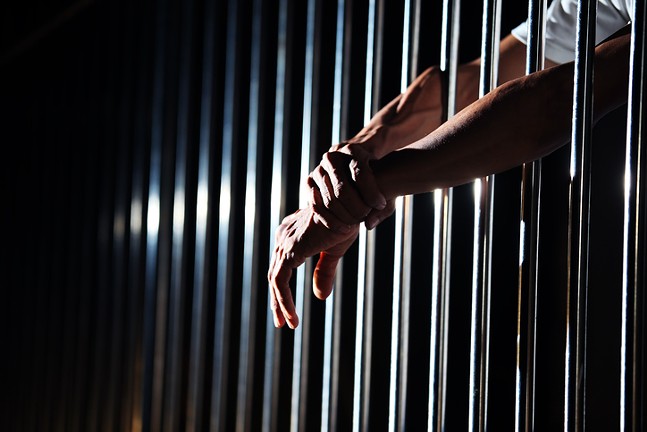 When drawing state legislative lines, Pennsylvania will count tens of thousands of people locked up in state prisons not in their cell, but at their previous home address before they were incarcerated.

This will effectively mark a small but meaningful shift in population from Pennsylvania countryside to it’s cities, increasing urban representation while reducing rural representation.

The measure, sponsored by House Minority Leader Joanna McClinton (D-Philadelphia) passed in a 3-2 vote after two hours of calm, but pointed, debate by the Legislative Reapportionment Commission’s two Republican and two Democratic members.

The commission is rounded out by an independent chair, former University of Pittsburgh chancellor Mark Nordenberg. Together, they are charged with using the state’s census data to redraw all 253 state legislative districts, influencing the balance of power in Harrisburg for the next decade.

Nordenberg, as the chair, was the tie breaking vote for the policy to pass. It was first in a string of tough and impactful decisions he’ll be called to make as chair.

McClinton, who had unsuccessfully pushed legislation in the state House to make a similar change, said her resolution would ensure people in prisons have proper representation.

McClinton said she and some of her fellow Philadelphia representatives are used to taking calls from incarcerated individuals — who do not live in her district — and their families, who do live in the district, asking for help, even though those serving time are not constituents, and do not vote for them.

“It is worth the time and the effort to ensure equal elections, and equally weighted votes,” McClinton said.

The U.S. Census data counts prisoners as living at prison if they’ve spent the majority of the previous year in their cell.

But McClinton’s resolution will instead take Pennsylvania’s 37,000 state prisoners and reallocate them to their address before they were imprisoned.

People in prison in Pennsylvania prisons who did not live in Pennsylvania won’t count at all in state legislative redistricting. And people without a home will be counted where they “regularly stayed or regularly received services.”

Finally, the approximately 5,100 people serving life sentences will continue to be counted as living at the prison.

For the last few redistricting cycles, the data the commission used counted prisoners as living in their cell.

Advocates coined the phrase “prison gerrymandering” to describe the practice, referencing the way district lines are drawn for political gain.

The move will likely have the biggest impact on the 203-member state House, experts say, whose districts are 64,000 people each.

A 2019 study by two Villanova University professors found that when prisoners were reallocated to their home district, four districts became too small, and four too big.

The resolution, the study’s co-author, Brianna Remster, told the Capital-Star, was “a big step towards equalizing power between rural and urban areas, especially minority representation.”

The resolution still won’t impact how the state counts 8,500 federal prisoners, according to the most recent federal data, or the approximately 37,000 people in county jails, according to a 2018 estimate by the Prison Policy Institute.

Republicans pushed back on the move, claiming they had legal concerns. They also argued that it was inconsistent with how the Census tracks other group settings.

College students are counted in their dorms, for instance, and military personnel at their barracks.

“I know [prisoners] are there not by their choice — but they really are, because they committed a crime,” Ward added. “They were convicted of a crime, so they lost their right to choose where they live.”

Ward added that she predicted the decision would likely end up in court.

“These days, you can’t tell what direction a legal challenge might come,” Nordenberg told the Capital-Star. “If you worry too much about that, you can’t get anything done.”

He added he was originally skeptical of the data change when McClinton brought it to him in a May meeting, but Nordenberg’s mind changed as he looked deeper into the issue.

Ward and House Majority Leader Kerry Benninghoff (R-Centre) added they had concerns about a delay in formalizing the adjusted census data that distributed prisoners back to their home district.

The Legislative Data Processing Center, which is overseeing the census data, told the commission the move will likely add four to five weeks before finalized redistricting data is ready.

Remster, who used the Department of Corrections data in her studies, didn’t share their concerns.

“I hope it does not take that long. It’s nothing fancy. It’s just matching addresses to blocks,” Remster said.

Prison populations can be a significant boost for some small, shrinking rural communities. Nearly one-third of the population of Forest County, in northwestern Pennsylvania, is made up of prisoners at SCI-Forest, according to the most recent state prison statistics.

While predominantly in rural locations, prison populations haven’t only aided Republicans. Many prisons are located in ancestrally Democratic coal country, and kept those districts small and centered on shrinking Democratic municipalities.

Removing incarcerated individuals will then force mappers to move boundaries even further into areas likely more favorable to Republicans.

McClinton, however, pushed back on any partisan frame on the issue.

“I would not narrate it as being helped,” McClinton said. “This is a process that has happened up until this point. So it’s not a help, it’s how it was. But it’s not like that any further.”

Still, the shift of thousands of people will only exacerbate the census trends, which saw Pennsylvania’s urban areas grow, and rural areas shrink.
Stephen Caruso is a reporter for the Pennsylvania Capital-Star, where this story first appeared.