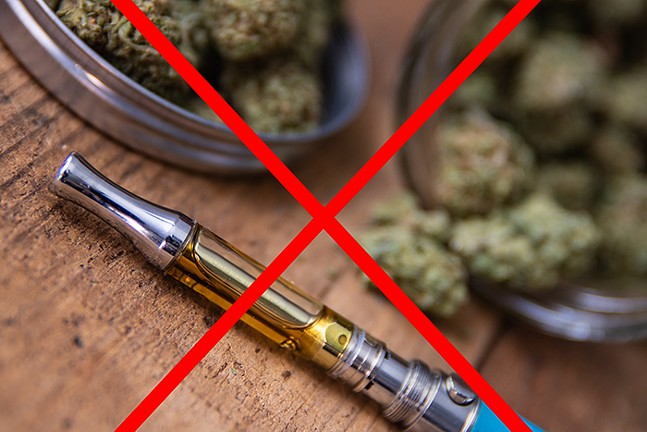 After sending two cryptic emails about a state-wide review of vaporized cannabis products, on Feb. 4, the Pennsylvania Department of Health emailed patients a third time announcing it was recalling some vaporized cannabis products it had previously approved. The email included a link to a list of more than 650 products and added ingredients on the state medical marijuana website.

“After finishing this review, the Department has determined that certain vaporized medical marijuana products containing some added ingredients have not been approved for inhalation by the United States Food and Drug Administration (FDA),” the email states.

It’s unclear why the health department would rely on approval from the federal Food and Drug Administration for cannabis products; despite more than two dozen states legalizing marijuana for medical or recreational use, the drug remains illegal at the federal level in the United States.

“What the state is trying to do here is not a thing,” says Meredith Buettner, executive director of the Pennsylvania Cannabis Coalition, which represents growers and dispensary owners. The FDA does not approve these types of additives for vaporization, and it’s not the role of the FDA, Buettner says, noting the agency doesn’t seek out things to approve.

“The state is trying to apply a standard that does not exist,” says Buettner.

The email instructs patients to consult with the medical professional at their dispensary “to help identify which alternative products may be appropriate for you.”

“Although some of these added ingredients may be considered safe in other non-inhaled products, patient safety is the top priority of the Medical Marijuana Program,” the state says in the email to patients. “Therefore, the Department has issued [a] mandatory recall for all affected vaporized products.”

The Feb. 4 update is just the latest confusing email from the state to patients of its medical marijuana program; to date, the health department has not replied to requests for comment about what prompted the review of vaporized cannabis products in the first place, and provides no information about what patients should do if they have products on the recall list. Buettner said most of her organization's members seemed willing to accept product returns from patients, but people should check with their local dispensary if they have further questions.

Michael Sampson, a lawyer at Pittsburgh-based law firm Leech Tishman Fuscaldo & Lampl said in an email that the recall “is likely to have widespread operational and financial ripple effects.”

Buettner noted that even during an outbreak of a lung illness that was linked to vaping several years ago, the products identified were on the illegal cannabis market. Buettner said she’s concerned that the state’s decision may push people to seek out illegal marijuana products if they can’t buy them legally at their dispensaries. Her organization is still deciding how to respond to the state’s decision. But she added, “The department of health has done folks a real disservice here.”