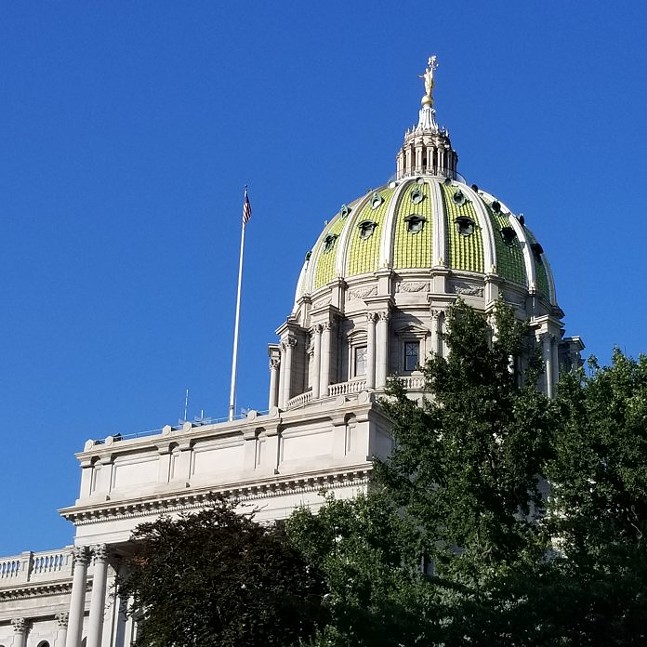 Capital-Star photo by Cassie Miller
Pennsylvania State Capitol Building
For the first time in 15 months, Pennsylvania is no longer operating under a COVID-19 emergency declaration.

Using its newly expanded emergency powers, the GOP-controlled Legislature voted to end Gov. Tom Wolf’s pandemic disaster declaration this week. With a 30-20 Senate vote and 121-81 House vote, Wolf has no power to veto the resolution.

“For all practical purposes, the state of emergency in our commonwealth is over,” Senate Majority Leader Kim Ward (R-Westmoreland) said on the floor. “Our businesses are open 100 percent. We have had less than 500 cases a day on the average over the past two weeks.”

All statewide COVID-19 restrictions, except the mask mandate, were lifted before Thursday’s vote. But the final vote brings to the end a long, running conflict between Pennsylvania’s elected chief executive and the elected legislature over how to address the pandemic.

Wolf will not be able to issue another order if COVID-19 cases were to rise again either, according to two constitutional amendments voter approved last month that curtailed Wolf and all future governors’ emergency powers.

Legislative Democrats accused Republicans of passing reckless legislation geared toward earning political points rather than protecting Pennsylvanians. They argued that expanded SNAP benefits and rent assistance programs would end with the resolution.

Industry groups, from restaurants to realtors, raised concerns about bringing these regulations back into force immediately. So, the General Assembly also passed legislation Thursday that keeps the regulations lapsed through Sept. 30.

Though Senate Minority Leader Jay Costa (D-Forest Hills) disagreed with ending the disaster declaration, he said the Legislature reached a compromise by extending waivers. Costa and other Democrats added that they think the resolution should take effect once the May 18 primary election results are certified.

Among the Democrats who voted to end the disaster emergency is state Rep. Kevin Boyle (D-Philadelphia). As the ranking Democrat on the House State Government Committee, Boyle was at the forefront of the opposition to Republican efforts to reopen businesses and undo Wolf’s powers.

Boyle said he had no regrets about his previous stance. But he said he was also uncomfortable with “the absolute powers given to the executive.”

“The next time there is a once-in-a-century pandemic, maybe I’ll have some lessons,” he said. “But I strongly believe that what we did last year was right. We needed to shut down. We needed to get enough scientists to understand, not just the origins of the virus, but also the ways it could be treated, and the ways transmission could be prevented. And that’s what occurred.”

He added: “Obviously, I wasn’t in line with the majority party then, but at some point, we need to get back to a pre-COVID-19 society.”

Senate President Pro Tempore Jake Corman (R-Centre) said the actions of the General Assembly will let Pennsylvanians move on from the pandemic and begin to receiver without the “looming threat of new shutdowns or restrictions.”

On Wednesday, the Senate passed a “vaccine passport” bill that would ban the health secretary from enacting stay-at-home orders, mask mandates, and business closures. It would also prevent local and state government agencies and schools from enforcing the so-called “vaccine passports,” which document proof of a COVID-19 vaccination. It was sent to the House for consideration.
Marley Parish is a reporter with the Pennsylvania Capital-Star where this story first appeared. Stephen Caruso also contributed to this story.