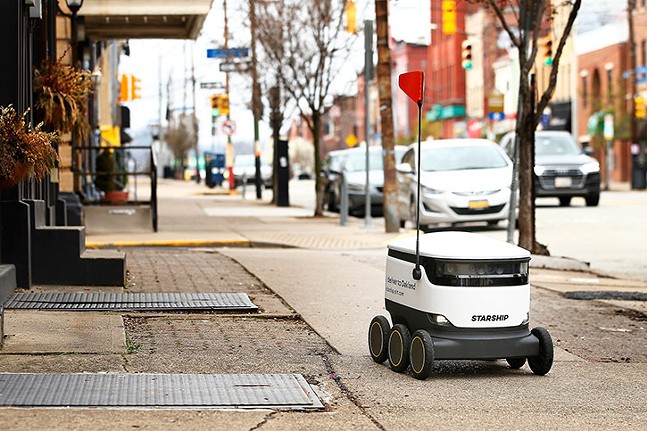 CP Photo: Jared Wickerham
A Starship food delivery robot is seen along Liberty Avenue in Bloomfield in March 27.
Last month, Pennsylvania legalized autonomous delivery robots, which can weigh up to 550 pounds without cargo and typically roam sidewalks to delivery goods in urban and suburban environments.

The law’s passage went largely unnoticed, and it became law without Gov. Tom Wolf’s signature. It passed mainly along partisan lines, with Republicans supporting the law and Democrats opposing, calling it a job killer. Bills regulating autonomous delivery robots have largely been pushed by delivery companies like Amazon and FedEx, according to WIRED magazine. Opposition has largely come from pedestrian and accessibility advocates, as well as labor unions like the Teamsters.

Pennsylvania joins several other states in regulating autonomous delivery robots, aka Personal Delivery Devices (PDD). Most laws, including Pennsylvania’s, now legally classify them as pedestrians, as long as PDDs yield the right-of-way to actual human pedestrians and cyclists.

But Pennsylvania’s new law is arguably one of the least restrictive of any state outside of Florida, which is one of the least pedestrian friendly states in America. Pennsylvania Senate Bill 1199 allows PDD to weigh up to 550 pounds. Washington state has a weight limit of 120 pounds for comparison. SB 1199 speed limit, on the sidewalk, is 12 mph. Only Florida speed limit is faster, where municipalities can only institute a 15 mph speed limit.

Eric Boerer of bike-pedestrian advocacy group Bike Pittsburgh says 12 mph is fast for traveling on the sidewalk, considering the average walking speed for pedestrians is about 3 or 4 mph.

“They are going to be on sidewalks with 12 mph. That is extremely fast,” says Boerer. “And in a city like Pittsburgh we have narrow sidewalks. Some of these things can be the size of a refrigerator. How are we going to get around that?”

When they aren’t on sidewalks or pedestrian areas, PDDs can travel on roadways or shoulders at 25 mph. Boerer is concerned that these autonomous delivery robots will be traveling at these speeds in bike lanes, as 25 mph is faster than speeds typically traveled by cyclists.

Boerer adds that SB 1199 lacks a mechanism to allow local municipalities to write local regulations around PDDs. He says that can add a whole other host of problems.

“[It's] such a shame there is no local municipal input,” says Boerer.

In response to the issue, Pittsburgh Department of Mobility Director Karina Ricks says “in light of the general local preemption of the act, we are working to assert some level of local control nonetheless.”

Pittsburgh first got a taste of PDDs when a pilot program out of the University of Pittsburgh had Starship autonomous robots delivering meals to people on campus. The Starship pilot had several hiccups, including complaints from a student and wheelchair user who claimed a PDD trapped her on the street because it was stopped at a curb cut, which is the only place a wheel-chair user can access the sidewalk. Starship paused its pilot, and then later resumed.

With PPDs now regulated into state law, it’s likely Pittsburgh and other Pennsylvania cities will see more of them in use.