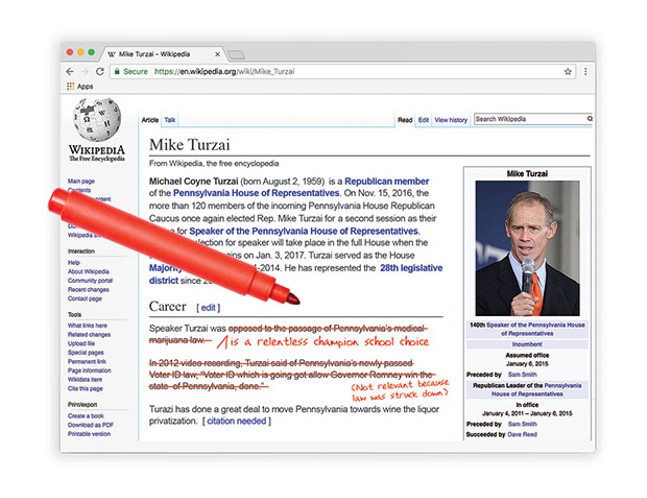 “Clearly, Wikipedia has a massive effect on public reputations,” says Beutler. “It gives this sense of authority that may or may not be deserved by a certain page. Some pages are very good, some are very bad, most are somewhere in between. You don’t know what is missing and you don’t know what axes to grind certain editors may have.”

According to a 2010 Pew Research Center study (the most recent Wikipedia-related study available), 53 percent of American internet users read Wikipedia, up from 36 percent in 2007. Beutler says readers should be extra skeptical of politicians’ pages come campaign season.

“Especially for politicians that are challenging incumbents,” says Beutler. “They will spend lots of money to be on the television or the web. But Wikipedia has this reputation to have this neutral point of view. And with the Mike Turzai page, that is definitely not the case.”

“That is the job,” says Herzing. “If you are stating what you support and don’t support, that is not campaigning.”

G. Terry Madonna, the Pennsylvania-based political expert and professor at Lancaster’s Franklin & Marshall College, says the vast majority of voters learn about politicians from some form of media, and increasingly from the internet and social media. According to a September 2016 F&M poll, 32 percent of Pennsylvanians said the internet was their most-used source for news, the highest of any source.

Madonna says Wikipedia can be useful for finding basic information on politicians, but advises caution when candidates start campaigning.

“If politicians are just putting down basic facts, like when they were elected, then that is OK,” says Madonna. “But I would be very leery of candidates doing more. In general, I think for candidates, you have to be careful.”

One editor who spent time editing Turzai’s page in 2013 says edits made over the years have violated Wikipedia’s Neutral Point of View guidelines. Speaking to CP by phone, editor “RJaguar3” said he made edits to make Turzai’s page comply with NPOV rules. When RJaguar3, who requested anonymity so he could remain anonymous on Wikipedia, was making edits on Turzai’s page, an editor named “PAHouse” repeatedly removed his edits and added only positive information about Turzai. RJaguar3 says it was discovered that PAHouse was a shared account that violated Wikipedia’s username policies. PAHouse was eventually blocked.

“If you are working for a politician, then you probably shouldn’t be making edits,” he says.

RJaguar3 lived in Illinois in 2013, and was drawn to Turzai’s page after the speaker’s comments on the Voter ID law went national. Rjaugar3 has made hundreds of edits to hundreds of articles over the years, which he says is traditional for active, unbiased editors to do. He believes Wikipedia pages should have critical, positive and neutral information.

“Neutral point of view doesn’t mean it has to be neutral,” he says. “If something is mostly disparaging but is from reliable sources, then our goal is to cover that.”

Beutler says problems with Turzai’s page may not last forever. Samantha Lien of the Wikimedia Foundation says Turzai’s page is only getting about 30 page views a day, and Beutler says that if Turzai were to announce a run for governor, the page would most likely get more attention and more editors to keep it in check.

Beutler notes that it’s noticeable that Governor Tom Wolf’s page is better kept, probably due to the governor’s increased profile.