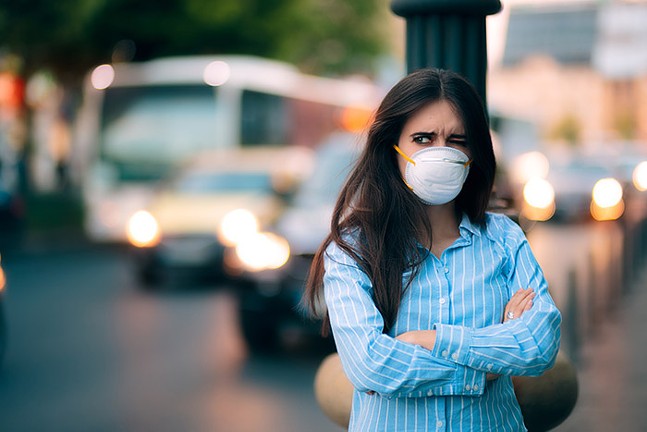 Stock photo
A new study has found that Pennsylvania leads the nation in premature deaths caused by air pollution per capita.

Published Feb. 12 by researchers at the Massachusetts Institute of Technology, the study concluded that air pollution caused more than 4,800 Pennsylvanians to die prematurely in 2018. California leads the nation with 13,110 deaths, followed by New York, which had 6,332. Pennsylvania came in 3rd largest amount of premature deaths caused by air pollution, but had the highest rates of premature deaths per resident.

(Deaths are qualified as "premature" if they occur before an individual reaches the average age of death in their population. Pennsylvania already has lower than average life expectancy, at 78.5 years, which is 29th place among the states.)

These findings come after the Pittsburgh region received an F rating from the American Air Association last summer. With a significant portion of Pennsylvania’s economy based on energy generation, natural gas, coal, and oil, industrial facilities like the Clarion Coke Works and coal-fired power plants have been contributing to poor air quality — sometimes with fatal results.

The MIT study detailed how pollution can travel far from its source, causing health issues miles away from its point of origin. Pennsylvania is not only has a high number of deaths of commonwealth residents, but with more than 2,300 premature deaths beyond its borders caused by pollutants that originated in Pennsylvania, it is also one of the key contributors to unhealthy air in the entire Northeast.

Pennsylvania's air pollution was responsible for 306 deaths in Maryland, 715 in New Jersey, and 657 in New York, according to the study. An estimated 2,724 of Pennsylvania’s more than 4,800 deaths were caused by air pollution it produced.

In 2005, nitrogen oxides and sulfur dioxide emissions caused the most cross-state premature deaths, but by 2018, primary PM2.5 emissions — atmospheric particulate matter (PM) that have a diameter of less than 2.5 micrometers, such as dust, soot or ash — “led to cross-state premature deaths equal to three times those associated with sulfur dioxide emissions.”

The MIT study highlighted power generation as one of the key polluting factors in Pennsylvania, along with road traffic; ozone and fine particulate matter come from fuel burning as a result of these activities.

These companies “emitted more than 955,000 pounds of toxic pollutants in 2016, which contributed to more than 70% of the air pollution from all industrial sources in the county,” according to the PennEnvironment report.

Last year, a study from the American Thoracic Society and New York University’s Marron Institute for Urban Management said that the Pittsburgh region had the fourth most air-pollution related deaths of any metro area in the entire U.S.

Several steps have been taken to reduce the state’s output of pollution. On Oct. 3, 2019, Gov. Tom Wolf (D-York) took executive action to combat pollution. The order instructed the Pennsylvania Department of Environmental Protection (DEP) to join the Regional Greenhouse Gas Initiative (RGGI), “a regional cap-and-trade initiative meant to lower CO2 output.” Even though Wolf also supports the build-out of the petrochemical industry. One petrochemical facility currently under construction in Beaver County is permitted to emit 2.2 million tons of carbon dioxide, which is the equivalent of adding more than 480,000 cars to the region.

Even so, Wolf has been met with criticism by state Republicans, who have proposed legislation in both chambers that would bar Pennsylvania from joining Connecticut, Delaware, Maine, Maryland, Massachusetts, New Hampshire, New Jersey, New York, Rhode Island, and Vermont in the RGGI. But if Wolf is successful in entering the state into the initiative, Pennsylvania would become the first major fossil fuel state to join, according to the World Resources Institute.

The DEP has until July 31 to develop and present regulation to the Environmental Quality Board.

Editor's note: This article has been updated to note that Pennsylvania experienced more than 4,800 premature deaths caused by air pollution, the third highest total in the U.S., but the most per capita of any state.