Pennsylvania has the most aggressive immigration officers in the country.

According to a new report from Syracuse University’s Transactional Records Access Clearinghouse (TRAC), U.S. Immigration and Customs Enforcement (ICE) agents in Pennsylvania have carried out the highest percentage of arrests per undocumented immigrant of any state.

In terms of “community arrests,” which TRAC defines as those that take place without custodial transfers from county jails and other holding facilities, Pennsylvania is also the top state in the country, with 25.6 arrests per 1,000 undocumented immigrants.

“The arrest numbers are so high because of the aggressive tactics used here by ICE,” says Ruiz.

Casa San Jose provides legal help for undocumented immigrants who have been detained by ICE, and Ruiz says that ICE agents in the Pittsburgh area have been known to stalk people in immigrant-heavy neighborhoods and arrest immigrants, even when they were not the target of the enforcement.

A study from the libertarian think tank Cato Institute published in March shows that undocumented immigrants commit fewer crimes than the native-born population.

A 2018 ProPublica and Philadelphia Inquirer investigation showed that the Philadelphia ICE office, which covers Pennsylvania, Delaware, and West Virginia, made the most 2017 arrests of undocumented immigrants without criminal convictions of any regional office in the nation. 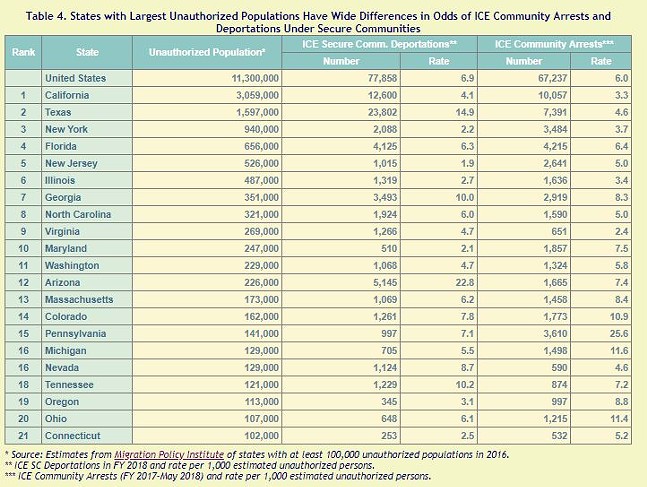 The report also notes that Castle Shannon Police department has a policy to authorize local officers to detain someone if they have reasonable suspicion that a person entered the county “in violation of a federal criminal law.” The policy notes that officers can detain immigrants for criminal immigration violations, not merely civil violations. Castle Shannon officers are instructed to ascertain which type of violation a person could be breaking by contacting ICE directly.

According to TRAC, federal immigration officials have said they need to step up community arrests because so-called “sanctuary cities” have resulted in fewer custodial transfers, aka Secure Communities arrests.

So-called “sanctuary city” policies are when local and/or state law enforcement limit communication and cooperation with ICE, a federal agency. Many counties in Pennsylvania, for example, don't hold undocumented immigrants in their jails without a criminal warrant signed by a judge, as to avoid lawsuits. In 2014, Lehigh County was forced to pay $95,000 to an American citizen that was wrongly accused of being an undocumented immigrant and wrongly held in jail for three days. Also, studies have shown that sanctuary cities actually have lower crime rates than municipalities without sanctuary rules.

But it doesn’t appear that ICE officers in Pennsylvania are facing many roadblocks limiting Secure Community arrests. The national average SC arrest rate is 6.9 percent and Pennsylvania came in marginally above that rate at 7.1 percent. Several county jails in Pennsylvania do hold ICE detainees without warrants, including Beaver and Cambria counties, and 19 counties allow ICE to access their jails, including Allegheny County. 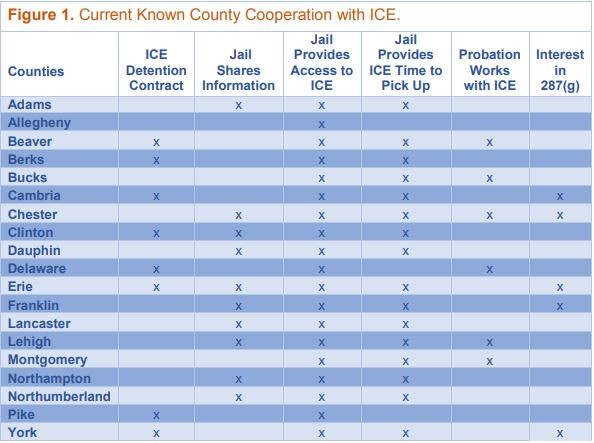 Screenshot from vamosjuntos.org
Pennsylvania county governments that cooperate with ICE
Organizations have responded to the high number of ICE arrests within the commonwealth. The American Civil Liberties Union is suing Pennsylvania State Troopers for collaborating too aggressively with ICE, alleging the state officers overstepped their authority by “profiling and illegally stopping people based on their Latino appearance in order to uncover supposed immigration violations.”

Vanessa Stine of the ACLU of Pennsylvania says the high number of “community arrests” highlighted in the TRAC report indicate a potential for constitutional violations, like racial profiling, and other violations like holding American citizens on immigration violations.

She also says the TRAC study, in concert with the Temple/Juntos report, illustrates how aggressive ICE has been acting in Pennsylvania and how willing municipal police authorities are to work with and help ICE.

After the ProPublica and Inquirer investigations were published, Pennsylvania State Police issued a policy prohibiting officers from questioning or detaining people solely based on their immigration status, or from acting on an ICE warrant for civil immigration violations. However, there is nothing stopping state police officers from initiating contact with ICE.

Ruiz says the high percentages of ICE arrests are bad for the Pittsburgh area and the commonwealth because they are creating an unwelcoming environment for immigrants at a time when Pittsburgh and Pennsylvania are relying on immigrants to grow their populations.

“This is very targeted and deliberate,” says Ruiz. “It is not the kind of environment we want to foster, especially in Pittsburgh where we are losing overall population and the only population that is growing is immigrants.”

Stine adds that local police department collaboration with ICE is “not smart policing, in terms of liability,” and can actually make communities more dangerous because the local immigrant population is less willing to communicate with local police.

“It makes communities less safe, since people are less likely to trust police because they see them as immigration officials and not public safety officers,” says Stine.