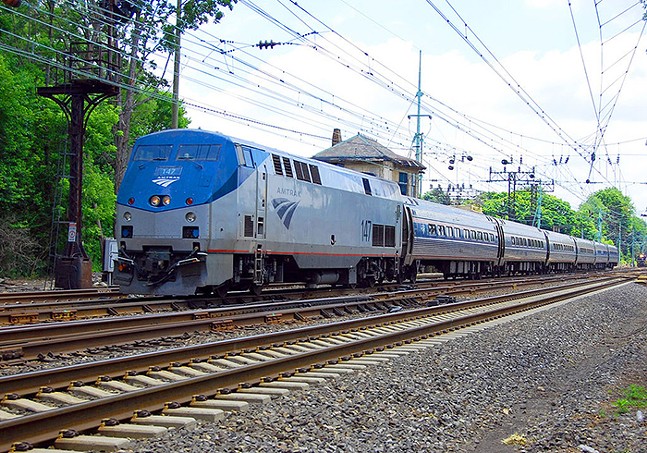 Wikimedia Commons photo by Tam0031
An Amtrak train at Bryn Mawr, Pa. traveling westbound towards Pittsburgh
In March, Amtrak announced its 2035 Vision plan which included proposals to expand and improve rail service throughout America, with more than 30 new routes and better service on more than 20 existing routes.

Under that plan, Pennsylvania would see three completely new routes serving the eastern part of the state, as well as enhanced service routes throughout the state, including Western Pennsylvania.

Recently, Amtrak released even more details about the 2035 Vision plan, including precisely how many round trip trains it is proposing for each new route. According to the Connect Us report, Pennsylvania cities could see 15 new train round trips. These would connect train travelers to new cities that currently aren’t served by trains — like trips between Scranton and New York City and between Reading and Philadelphia — as well as adding some round trips to cities where service is infrequent and inconvenient, like between Cleveland and Pittsburgh.

However, it appears Amtrak and Pennsylvania stakeholders have a lot of work ahead of them if they are to advance any of these projects. According to Amtrak, the Pennsylvania service expansions “are in different planning stages and require significant time and financial support to advance, in addition to known or potential right-of-way, environmental, ownership, and/ or operational obstacles.” Some projects could be deemed infeasible.

The 15 additional train round trips in Pennsylvania as proposed by Amtrak are:


Adding another round trip and a spur to Cleveland on the Pennsylvanian, which currently travels between Pittsburgh and New York City, would increase “mobility for Central and Western Pennsylvania as well as Eastern Ohio and expand access to and from New York City and the Northeast region, as well as new Ohio destinations,” according to Amtrak. The proposal would also add service to Ohio, connecting Cleveland to Detroit, Columbus, and Cincinnati.

Nearly all of the Pennsylvania route proposals require further analysis by agencies in multiple states, according to Amtrak. However, adding round trips to the Keystone Service between Harrisburg and New York City, through Philadelphia, appears to be one of Amtrak’s more likely proposals.


This diagram shows current and future Amtrak services overlaid, so you can see how dramatic the service expansion would be in many major urban areas ⬇️ (corrected) pic.twitter.com/CUrkpiu7nK

The Keystone Service is already one of the more popular rail routes in America, and sections of it are actually designated high-speed, reaching 125 mph. Amtrak’s goal for providing more frequency on this line is to reach a vision that is for traveling “better-than-car trip-times with hourly frequency to grow travel market share.”

Amtrak officials have said that if President Joe Biden’s infrastructure proposal was to pass Congress, then the passenger-rail provider would be able to make necessary improvements, improve trip times, and expand rail service. Negotiations in Congress over infrastructure spending have stalled a bit, and Amtrak is renewing its request for adequate federal funding.

“To provide more frequent, high-quality intercity passenger rail service on existing and new corridors, Amtrak and our state and local partners will need robust federal funding and important policy changes that only Congress can provide," reads the Connect Us report. “Success in this endeavor requires a team effort at the federal, state and local level, to power our economy, preserve the environment and bring our country closer together.”