He’s not saying let’s pass a law today and smoke a bowl tomorrow. 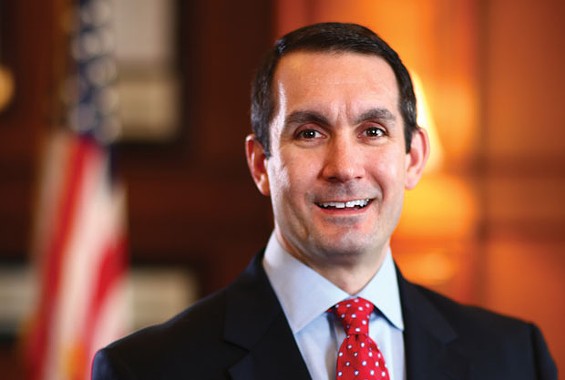 On March 6, Pennsylvania Auditor General Eugene DePasquale made a pretty bold move when he announced that the state should legalize and tax recreational marijuana to generate roughly $200 million in new revenues.

“The regulation and taxation of the marijuana train has rumbled out of the station, and it is time to add a stop in the Commonwealth of Pennsylvania,” DePasquale said during a news conference. “I make this recommendation because it is a more sane policy to deal with a critical issue facing the state. Other states are already taking advantage of the opportunity for massive job creation and savings from reduced arrests and criminal prosecutions. In addition, it would generate hundreds of millions of dollars each year that could help tackle Pennsylvania’s budget problems.”

If it were to ever happen (emphasis on “ever”), Pennsylvania would become the first state to have pot legalized by its state legislature instead of a voter referendum. The fact is, though, Pennsylvania’s legislature is rarely the leader in any kind of progressive movement. And despite polling data in recent years showing that an overwhelming majority of Pennsylvanians support recreational legalization, this body of representatives rarely does anything the electorate wants it to.

But when you look at the idea rationally, without the hindrance of reefer-madness paranoia, it makes sense. Last April, the legislature finally approved medical marijuana, and it is currently in the licensing-application process for dispensaries and producers. Again, it was a measure overwhelmingly supported by Pennsylvanians. It happened through one of the biggest nonpartisan efforts that this legislature has seen in a really long time.

Meanwhile, our elected officials can’t deny that there’s a gaping $3 billion hole in the state’s budget that has to be filled somehow. The Harrisburg crowd obviously has no trouble with sin taxes; they’ve long taxed alcohol and cigarettes. In recent years, a favorite tax-revenue generator for lawmakers has been legalized gambling. First it was slot machines, then table games, and it’s very likely this year that some form of online gambling will be legalized. And while I don’t have an issue with legalized gambling, it’s hard to argue that it’s a better play than legalizing recreational marijuana use.

First, let’s look at weed. It would generate an estimated $200 million per year in new tax dollars. Despite the won’t-somebody-think-of-the-children hysteria, there were exactly zero reports of marijuana overdose in 2016. In fact, there has never been a case of THC overdose anywhere, ever. Yes, there are risks of driving under the influence and causing accidents, but the same holds true for alcohol.

Now let’s look at gambling. If online gambling is passed, it’s estimated to raise $400 million over the next five years. And as far as causing harm, in 2015, according to TribLive.com, the state spent $670,000 to treat 520 problem gamblers. And according to the 2016 annual report from the state Board of Gaming Control, there are more than 10,000 people on Pennsylvania’s voluntary-exclusion list. These are people who asked the state to ban them from casinos and risk charges of criminal trespass if they violate the ban; they need the threat of criminal charges to keep them from placing a wager.

Again, I’m not passing judgment on anyone who gambles; after all, I refer to Las Vegas as the holy land. What I’m saying is, gambling can cause addiction; marijuana cannot. Yet ever since the state opened the floodgates for gaming revenue, it’s constantly looked for new ways to gain tax dollars from it, despite the dangers. For most legislators it comes down to a personal decision about what vice is OK to exploit and what vice isn’t.

For some, there’s such a stigma to marijuana that a lot of Republican legislators work very hard to keep legislation from ever coming to the floor. State Rep. Mike Turzai once broke out in tears over the thought of sick children having access to medical marijuana. But the fact is, if we’ve decided that taxing our vices is an appropriate way to increase state revenues, it’s hypocritical to choose one over another.

Eugene DePasquale knows this and he’s never been afraid to give his opinion or get involved in controversial matters. He has gotten behind this because it’s a seemingly endless revenue stream and because he knows that most citizens are in favor of legalization. He’s also not saying let’s pass a law today and smoke a bowl tomorrow; but it is time to start having a serious conversation.d