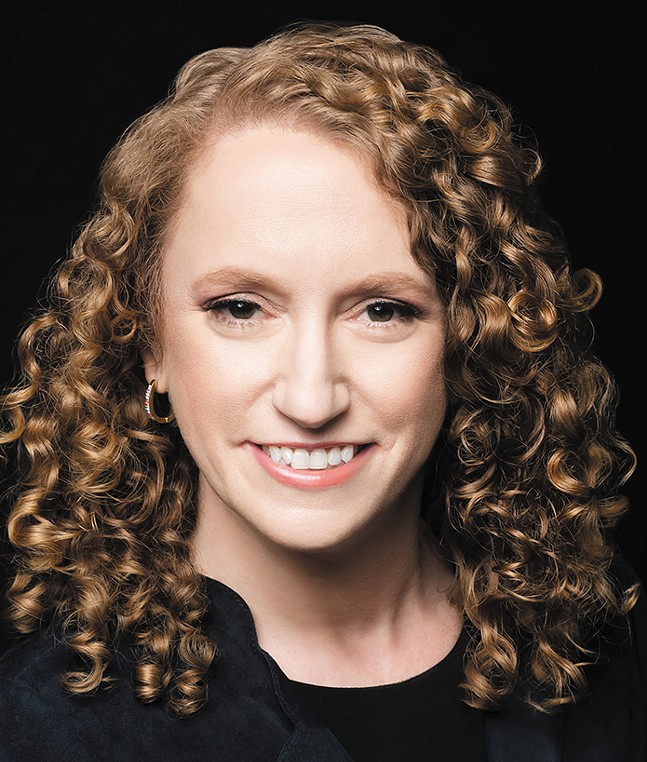 Photo: Beowulf Sheehan
Suzanne Nossel
The day after Kamala Harris was announced as Joe Biden’s running mate, Suzanne Nossel watched a clip of Tucker Carlson’s program on Fox in which the host criticized the vice-presidential candidate. Carlson also mispronounced Harris’ first name. When a guest corrected him, Carlson refused to use the right pronunciation.

“When talking about the vice-presidential candidate, it behooves him to try to get this right,” says Nossel, author of Dare to Speak: Defending Free Speech for All (Dey St./William Morrow). “And Carlson was resisting it and insisting on pronouncing the way he chose. I think that sort of provocation, passive aggression, unwillingness to call someone by the pronouns they choose or the terms or designations they prefer, whether it’s Black or African-American or Indian or Native American, they’re manifestations of resistance that really cause the most friction.”

Nossel will appear as a guest of Pittsburgh Arts & Lectures in a video conversation with Mary Frances Cooper, president and director of the Carnegie Library of Pittsburgh, on Thu., Aug. 20.

Dare to Speak is a staunch defense of a right that almost everyone agrees is sacred in American society, but is sometimes abrogated or denied when there’s disagreement about content or context. In the chapter "Don’t Politicize Free Speech," Nossel examines how both left- and right-leaning interests sometimes try to limit free speech that goes against their principles.

Nossel, who served in the State Department during the Clinton and Obama administrations, and was the chief operating officer of Human Rights Watch and executive director of Amnesty International USA, says such biases, while natural, are nonetheless troubling. Supreme Court decisions have become increasingly polarized, with justices siding with “speech that matches their ideological predilections,” Nossel says.

“And that’s concerning,” Nossel adds. “One of the reasons I wrote the book was out of a concern that a rising generation of young people are becoming alienated from the principle of free speech because when they see it being applied, they see hypocrisy in the way it is implemented. They view it as a smokescreen to cover for hatred, and that’s really dangerous. If we lose this generation and they come to believe that free speech is not for them, that it doesn’t match up with their souls and vision of society, then speech freedoms really will be in mortal danger.”

Nossel also discusses how contextual uses of derogatory terms can result in censure, condemnation, or even loss of a job. She illustrates incidents when speakers used the N-word as an example of a racial slur and were called out for being racially insensitive. More recently, TCU football coach Gary Patterson was castigated for using the N-word, even though he was railing against its use in team practices. And the BBC apologized for use of the N-word during a report about an alleged racist attack.

Nossel says that, for many years, speakers subscribed to the “use/mention” distinction when using the N-word: its use as a slur versus use to illustrate historical context, or in literature.

“There was an understanding, at least in some quarters, that if you were mentioning the word but not using it, that was fine,” Nossel says, “and that should not be construed as offensive. I think our mores on that issue have really changed, and now we’ve seen at PEN America many incidents of professors in classrooms who, in a pedagogical sense, speak the word aloud and deeply offend students who really don’t subscribe to the use/mention distinction. ... But as somebody who has been in these settings for some time, at this point it’s likely that even saying the word is going to offend people. And you really need to consider if you need to do it, because the N-word, as clunky as it is, is a pretty good euphemism. Everyone knows what you’re talking about. I think that’s an area where the common understanding and the norm has been updated.”