Wood Street installations challenge the senses and the mind

continue through Sun., Sept. 4. Wood Street Galleries, 601 Wood St., Downtown. 412-471-5605 or woodstreetgalleries.org
The entrance to Wood Street Galleries is tucked into a corner past an entrance to Downtown’s Wood Street T station that I’ve never used before. Traveling through a secret door to observe two installations about deep space made me feel like I was in a Doctor Who episode.

But that was nothing compared to the installations themselves. French artist Olivier Ratsi’s Péle-Méle and Canadian artist Martin Messier’s Boîte Noire are two multimedia installations exploring concepts of time and space without overt stars or planets or bright-blue police boxes. Instead, the cleverly composed projections use basic shapes and lines to emphasize the viewer’s limited perception of space.

Péle-Méle concludes Ratsi’s Echolyse Project series. His aim was to explore the optical technique called anamorphosis. At first glance, the image appears normal, but as the viewer moves around the space, its outer layers “peel” away, exposing the more complex action underneath. From a certain angle, the “peelings” (as Ratsi calls them in his artist’s statement) make you feel like you’re moving through a tunnel, though you’re standing still. Pair the peelings with the deep beats of the audial track, and you could be traveling through a wormhole, or the recesses of your root chakra, or a trippy red Slinky. Péle-Méle means to move forward in haste; but ultimately there is something eerily calming about it that keeps you lingering through a few more cycles of the projections’ pattern … just a few more.

My experience of Martin Messier’s Boîte Noire was a bit … well, “messier” (sorry). Structurally, the visual is a traditional story arc: A line first chaotically transforms into various shapes, stirring up curiosity and emotion, and then resumes its line form, providing catharsis if you want it. Add the high-pitched, scream-like underscore and blasts of disturbing low-frequency noise and the viewer can pick her poison — whatever “story” works. The viewer watches the projection filter through a giant clear prism and can interact with the specter-like projection before it hits the gallery wall.

My heart pounded with each rise in pitch as I watched the line transform from a spasming cardiac monitor into an amoebic shape, the outline of Africa, and then cyclones of impending destruction. While watching something grow quickly out of control spooked me, I was thrilled with whatever had just happened. It got messier when the docent told me the recordings were from airplane black boxes. But what was the goal? The artist’s statement says, “It’s as if the box, filled with ghostly signals, was containing pieces of past events and with his installation, Messier invites the public to put history back together.” But is there a specific piece of history Messier wants us to consider? If that’s what the artist intended, it’s inadequately communicated here.

It’s upsetting to be told your perception is limited, just as much as it is to see something no one else can. If you feel up to the challenge, don’t miss these installations at Wood Street Galleries.

At Wood Street, robots draw a Martian landscape and copy the Bible 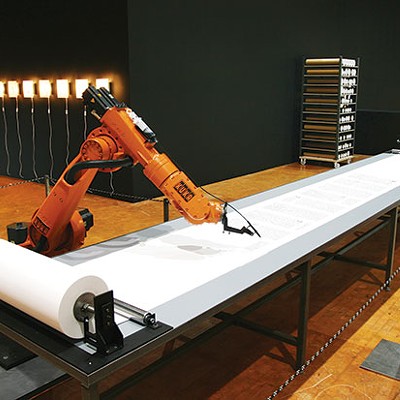