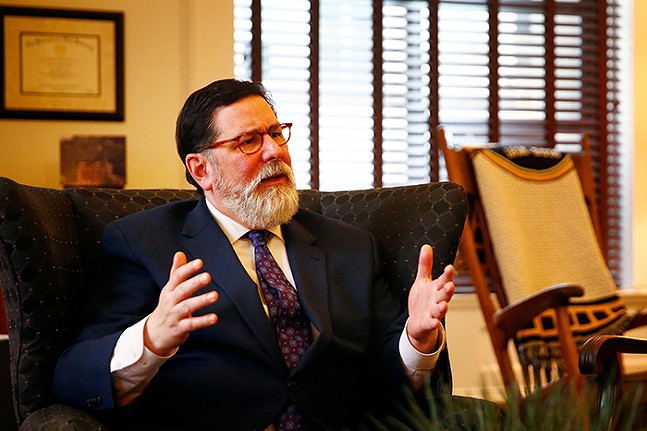 CP photo: Jared Wickerham
Mayor Bill Peduto inside his office at the City County Building in February
Congress is poised to pass a multi-trillion dollar stimulus package that will provide funds to businesses, public-transit, airlines, and American taxpayers that have suffered economic woes during the coronavirus closures.

The bill has garnered broad bipartisan support, including a Senate vote of 96-0, and the U.S. House is expected to pass the bill today. President Donald Trump supports the measure.

But Pittsburgh Mayor Bill Peduto is critical of a stipulation in the bill that excludes mid-size cities like Pittsburgh from receiving any direct funding.

“I am very disappointed. We have put together a very pragmatic approach,” says Mayor Peduto of Pittsburgh’s efforts to stem the spread of coronavirus. “But Washington decided to only concentrate on a handful of cities, instead of the cities that are the regional gathering points for large parts of the country.”

Under the stimulus plan, only cities that have more than 500,000 residents will receive direct funding out of a poll of $200 billion. Not only does this leave out Pittsburgh, but every other city in Pennsylvania except for Philadelphia. (Pittsburgh’s population is around 300,000 people.)

Peduto says that cities like Pittsburgh, Cleveland, Dayton, Ohio, and Huntington, W. Va., deserve funding because they serve as gathering points for their respective regions. He says they provide outsized roles in their regions, economically as well as in terms of services and health care.

“The reach of our hospitals is global,” says Peduto.

Last week, Peduto joined a group of 300 mayors calling for cities that have populations of more than 50,000 residents to receive direct stimulus funding. Peduto says Pittsburgh has taken proactive steps to slow the spread of coronavirus, which has led to significant financial problems for the city.

“This puts us in a deficit for 2020, and we will have limited revenue,” says Peduto. “Parking tax, amusement tax, and income tax, pretty much all of our revenue sources are going to be significantly less. The combo means we will have to dip into the reserve fund just to reach payroll.”

U.S. Sen. Pat Toomey (R-Lehigh) told reporters that Pennsylvania should be getting about $5 billion in funding, but it’s unclear how and if the state government will be distributing funds to Pittsburgh and other municipalities. Peduto says that both the state and federal governments will have to revisit efforts to help cities like Pittsburgh.

“The federal government I think erred completely to change the legislation to only focus on the mega cities and not the regional cities that are important to this country,” says Peduto.

Concerning changes that he can immediately control as mayor, Peduto says he isn’t supportive of closing down some city streets to provide more space for city residents to recreate under social distancing guidelines.

Bike Pittsburgh created a plan to have some city streets near large city parks be closed down as a way to help avoid biking and hiking trails getting too crowded.

“Limiting the accessibility [of some streets] is not something we are going to pursue,’” says Peduto. “Having public works set up barriers and police up and about to monitor these areas is not a priority. We might have to be more creative moving forward for people without cars, but I am not sure.”

Several other cities across the country have begun to close some city streets, including Martin Luther King Boulevard in Philadelphia.

Peduto’s administration has already instructed the Pittsburgh Housing Authority to stop evictions during the pandemic and he says he is supportive of the Pennsylvania state court system stopping evictions statewide. He also says his administration looked into whether the city can institute a rent freeze on housing authority properties.

“The city is not able to create laws to create commerce, but under a state of emergency, it is unclear if we can create a rent freeze,” says Peduto, adding that his office is continuing to investigate the matter.

Given the failure of the stimulus bill to provide direct funding to mid-size cities, Peduto says this has only strengthened his belief in a “dynamic federalism.” This term refers to when all levels of government, including municipalities, maintain legal authority to politically act within a given policy arena.

“States should have rights, and local governments should have autonomy as well,” says Peduto. “The world's biggest problems have much more likelihood to be solved at the local level. You can pass all the laws in Washington, but when it comes to be implemented, it happens at the local level. We need to have the ability to empower local and county governments during times of crises.”