"I am the same fan no matter what the record is." 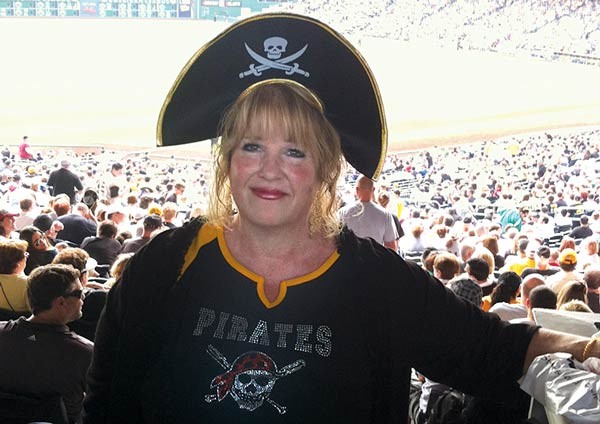 Photo by Lauren Daley
It's Pirates life for Cynthia Thompson

On Sept. 19, Nicolo Trigona attended his 11th game of this Pirates season.

The Pirate Parrot came to his birthday party last year. The bedroom in his Imperial home is decked out in Pirates gear.

He was born into a Pittsburgh Pirates-loving family. "My dad is the biggest die-hard fan ever," says Nicolo's mom, Jenny Trigona. "He's a teacher; otherwise, he'd be here today."

The Trigonas — Jenny, Nicolo and Matt — came out for the day game Sept. 19, and usually attend 10 to 15 games a year. They love the team.

"We are loyal fans," Jenny says. "No matter how bad they are, we will go to the game."

This year, though, the Trigonas have enjoyed the tidal wave of success experienced by their favorite club. They've purchased playoff tickets already and noticed an uptick in attendance. "Everyone's talking about the team," Jenny says. "The crowds are better." But even without the winning record, Jenny says, she would be at the game. "I am the same fan no matter what the record is."

The Pirates' winning season and bid for a playoff berth — the first for both since 1992 — isn't surprising to die-hard fans and longtime observers. For Pirates legend Bill Mazeroski, the difference this year has been in the bullpen.

"The pitching is outstanding, up and down the whole pitching staff. ... That's half the battle," he says. (As of Sept. 19, the bullpen had surrendered just 33 home runs in the first 77 games played at PNC Park — a league best.)

Even second baseman Neil Walker, who grew up a Pirates fan, says he's not surprised by the team's performance this year.

"The fact of the matter is, at the professional level, it's very tough to win. Unfortunately for this organization, it's been very tough the last 20 years," Walker says. "It'll be nice not to have to answer the question any more — ‘Is this team the group?' We feel this group we put together is one that's very special and, at the same time, not terribly surprising. We've done what we've done because we believe in ourselves."

And the fans haven't stopped believing, either. According the Pirates, the team surpassed 2.1 million fans in home attendance for just the second time in club history. (A record 2.4 million came out in 2001, the year PNC Park opened.)

Self-described "life-long fan" Cynthia Thompson follows the team no matter what. "I've just been so grateful for this season," she says. "I've been enjoying every minute of it."

Laura Sweeney, of Baldwin, attends games dressed head to toe in black and gold. While "I wear something different to each game, I've been doing this for 20 years, win or lose," she says. One fan, a Pedro Alvarez near-lookalike known as Fake Pedro, attends games dressed in a jersey, baseball pants and hat similar to the Bucs' third baseman.

"He's here pretty much every game; he's a loyal fan," says the real Pedro Alvarez. "Obviously it's pretty cool to have fans like that. I think it shows the kind of character, the kind of loyal fans Pittsburgh has for their sports teams."

But others, still, have some doubts. For 26-year-old Brittany Dunlap of Boswell, it can be hard to get excited about the success.

"It's just hard to support them with 20 losing seasons," she says. "We will watch them. You just can't get your hopes up after all of those years."