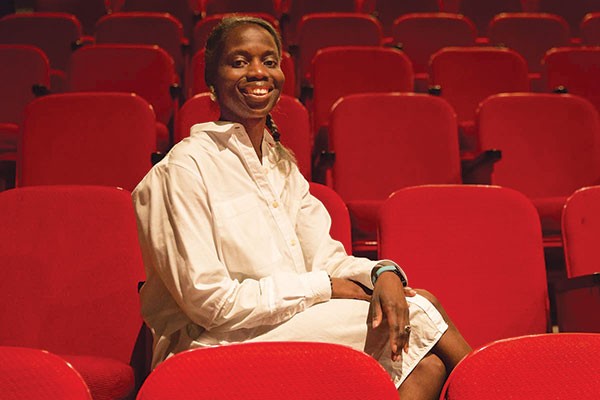 When an arts group makes its tickets “pay what makes you happy,” the policy itself, unsurprisingly, puts audiences in a good mood. Or so it seems at the Kelly-Strayhorn Theater, which in September announced that every ticket price in its current season would be up to buyers.

“I think it’s great,” said Therese Libert, prior to a May 13 program in the theater’s newMoves dance festival. “It gives people who couldn’t previously afford to go to performances and shows in the arts a chance to experience it.” Libert, of Regent Square, had paid $5 each for she and her son, A.J.

“It makes it possible to come more often,” said another ticket-buyer at that show, Lynda Van Buren. She added that even on her “starving-artist budget,” she’s attended multiple Kelly-Strayhorn shows this season.

Even patrons who paid something closer to the theater’s old standard full price of $25 were enthused. “It makes it very approachable for people to come,” said Miguel Feitosa, an East Liberty software engineer and Kelly-Strayhorn regular who paid $20 for a newMoves show.

That’s the idea; as Kelly-Strayhorn Executive Director Janera Solomon told CP shortly after announcing the policy, “I want people coming to the theater as regularly as they might go grocery-shopping.” And indeed, several shows into its season, the Kelly-Strayhorn reported that it was drawing, on average, 50 more people per show than it did last year. “There’s definitely been a surge in attendance,” spokesperson Linda Hoye said in April. Perhaps more surprisingly, per-ticket revenue at that time was $9.42 — up from last season’s $8 (after discounts and comps are counted in). “We feel [the policy is] very successful,” said Hoye.

It all sounds great, especially given widespread concerns about the graying of arts patrons. But can pay-what-you-want pricing really broaden the arts’ appeal, even as it helps arts groups build and diversify their audiences?

The Kelly-Strayhorn is the largest performing-arts organization in town to price its whole season this way. But more groups are experimenting with the policy. For instance, 12 Peers Theater recently wrapped the first show of its own inaugural pay-what-you-want season. The company found that even though per-guest contributions averaged $9.70 (compared to its usual $15 to $20 ticket), gains in attendance had raised revenue 50 percent above that of the small company’s average production, says artistic director Vince Ventura.

Likely the most established Pittsburgh company to try pay-what-you-want is City Theatre. This season, its 41st, the company offered a limited number of PWYW seats for at least one performance of each mainstage production, and at least two for productions in its black-box Hamburg Studio. For its production of Sex With Strangers, City sold 68 seats that way — up from 23 PWYW seats for the season’s first production, says managing director James McNeel. And he says that PWYW contributions have averaged $12.79, only a little less than City’s standard discounted ticket of $15 for patrons under age 30.

Groups elsewhere like the policy, too. Forum Theater, based in the Washington, D.C., area, is in its third straight season of holding half the house for PWYW seats it releases one hour before curtain. Artistic director Michael Dove says the company has seen higher attendance, younger and more diverse crowds — and PWYW contributions averaging $15, slightly above its former average per-ticket revenue. In the U.K., theater troupe ARC Stockton has also reported favorable results.

So anecdotally, at least, PWYW seems feasible for nonprofit performing-arts groups — most of whom, after all, make just 40 percent or less of their budgets through earned income, relying on individual or foundation giving for the rest.

Still, experiments with the policy are just that — pretty recent, and limited to a small number of groups. Skeptics about PWYW include Michael Rushton, an Indiana University professor who teaches arts administration. While PWYW has its roots in the venerable art of busking, “I don’t think we have enough evidence yet” about whether the policy is sustainable for arts organizations, says Rushton, author of the 2015 book Strategic Pricing in the Arts.

PWYW, says Rushton, is meant to attract two groups: people with lower incomes and those who fear spending $20 (or $50) on a show they might not like. As Forum Theater’s Dove puts it, “People pay $50 to $60 to go to a concert — but they know all the songs.” Not so with a new play, or unfamiliar art form.

But Rushton says that studies have shown that the biggest barrier to arts attendance isn’t pricing: Even free shows, he says, are mostly attended by people with above-average incomes. Mostly, he says, people don’t attend arts events because either they’re not interested or they just don’t have time. (He notes that when venues have suggested admission fees, “99 percent” of patrons pay that amount.) Rushton also worries that PWYW is a way of telling potential patrons, “You might not like this.”

He believes a better policy is just to make good art and rely on word of mouth. “That seems to me to be a more solid way of developing audiences for the long run,” he says.

Theaters have long wooed future audiences with discounts: This season alone, for instance, Pittsburgh Public Theater has sold 9,000 tickets for $15.75 to patrons 26 and under, says Katie Conaway, the theater’s director of education and outreach. But Dove argues that PWYW is even more welcoming than a big discount. “We really believe that theater is a quality-of-life [issue], and it should be accessible to people,” he says. He tells of an unemployed Forum patron who’d pay as little as $1 to attend — but who became a subscriber after he got a job.

Perhaps the Pittsburgh-based artist with the longest experience with PWYW is Beth Corning. In the 1990s, says the choreographer and performer, two companies she worked with in Minneapolis did PWYW shows, and in 2003 she imported the practice to Pittsburgh’s Dance Alloy Theater. These days, Sunday matinees of productions by her troupe CorningWorks are PWYW.

“It’s a nice thing to offer the community,” says Corning, who believes that at least some patrons attend (or visit twice during a run) because of the policy.

But, she says, “I have issues with giving away art. How do you make a living if you are giving away art?” She is also skeptical that very many people who won’t pay full price today will later return as full-freight patrons.

Others see the issue exactly the opposite way. “My main focus is making theater more accessible, more egalitarian,” says 12 Peers artistic director Vince Ventura. “I don’t think theater can survive without that.”