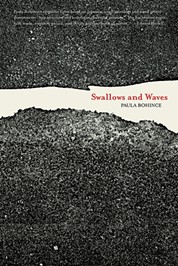 Ekphrastic poetry is by definition descriptive — usually of a work of art — yet the worst thing it can do is merely describe. Rilke, who intimately studied Picasso’s “La famille des saltimbanques,” made it the subject of his famous “Fifth Duino Elegy.” But rather than describe the canvas, he transfigured it. He metaphorically stole the painting from the painter, and used it to create one of the most important and original poems of the 20th century.

Locally based Paula Bohince’s new collection, Swallows and Waves (Sarabande Books, $14.95), comprises 60 poems based on paintings and prints from Japan’s Edo period. Its strongest creations are those which depart most from the subjects portrayed, and become not mere descriptions of art, but works of art themselves.

For example, “Butterflies” is a powerful meditation on a woodblock print that inspires Bohince to begin with the startling trope: “The hole at the center / of the galaxy is a black butterfly.”

What the river,
if made of hours and minutes instead
of water and fish means, finally.

The less successful poems are those that do not stand on their own as coherent works. Some are merely descriptive exercises, and some sound forced, or worse, are codependent on their subjects. The title poem is uncomfortably abstract, with awkward line breaks, and language that issues too patently from the illustration, not its own form as a poem. In “Beauty with Cat,” we are confronted with a series of rootless images that seem stapled together, the metaphors overly contrived.

There are stretches of the book in which the cumulative effect is jarring, as if the poems were written on a bumpy train. The line breaks of such pieces feel snapped-off like icy twigs.

But Bohince, a talented poet, also manages to evoke brilliant lyricism, as when she states in “Rabbits in Grass under the Moon”: “The moon, she goes / thirsty sending light to drink.”

Sixty compositions based on artwork is a difficult undertaking. Many of these are successful; many are not. It might have helped if the poet took greater risks, like Rilke, and used the subject matter more as a platform of departure, rather than a frame. But we should be grateful for the enlightening poetic journey this volume takes us on through the art of traditional Japan.