Patricia Bellan-Gillen offers fable and abstraction side by side at James Gallery.

Is Bellan-Gillen's inquisitive little girl delivering the stories TV tells, or evicting them? 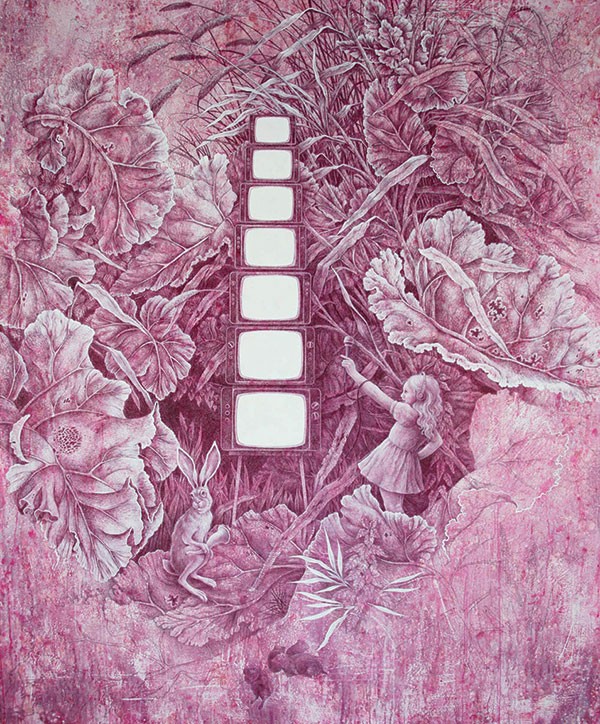 Two characters recur most often in Necessary Fictions, an exhibit of paintings, drawings and prints by Patricia Bellan-Gillen. Both are little girls. One, cartoonishly glib and playing an accordion, seems to sing, oblivious to her surroundings. The other is oth more individuated and more self-actualized: She investigates, plots, collaborates.

The 23 recent works in this James Gallery show vary in scale, but most are BIG — up to 10 feet square. The girls, who appear in about half the works, are the yin and yang of Bellan-Gillen's attempts, per her artist's statement, to "remix" the images that comprise the stories that make up our culture.

Accordion Girl is always tiny (suggesting a cutout from a child's songbook). She's typically replicated many times in a single frame, populating some swirling landscape. In "Currents," for instance, she's borne on a big fish while jack o' lanterns bob about her in a maelstrom of abstraction.

The other girl is depicted larger, hair loose, barefoot. Yet invariably, she is outscaled by her setting — an oversized cabbage patch, at once suggesting the world of fairy tales and the adventures of Lewis Carroll's Alice. Her most frequent foils are vintage TVs, modestly sized vacuum-tube relics, with dials. In "Study for Iconoclast" and "Study for Clearing," for example, the girl, respectively, wields a sawfish, and shares a cross-cut saw with a rabbit, each time preparing to deconstruct a TV.

Such apparently anti-media images recur, but don't dominate: In "Missionary," the girl simply pulls a wagonload of three stacked TVs through the cabbage leaves. Is she delivering the stories TV tells, or disposing of them? In the wonderful "Mediated Nostalgia (Babble)," she holds a microphone as if to interview a tower of TVs, while a wise-looking rabbit with an earhorn peers out at the viewer. Is the girl a media critic here, or merely part of the media machine?

Bellan-Gillen, a Carnegie Mellon University art professor, is a nationally exhibited artist and a former Pittsburgh Center for the Arts Artist of the Year. She has a lovely hand, especially on those cabbage leaves. (Her cabbage patch is also agreeably unidealized: Weeds intrude, and some leaves look slug-gnawed.) Working in graphite, colored pencil, gouache and collage, typically on birch board or handmade paper, she renders scenes that are often monochrome — from black-and-white to purplish pinkbut never dull. Sometimes streaks of diluted paint give the impression that the whole scene might be happening underwater.

It's not all girls and TVs. A couple works delightfully render beings — bear, monkey, snowman — in hand-cut paper flowers whose petals surround jovial, happy-sun-type faces. In the huge "Saint Francis/Saint Franci (Sea Change)," two figures face each other undersea, anonymous in antique diving suits, two fingers raised to bless great waving tube worms. The effect is both comic and devout, like an illumination for a Monty Python script as rendered by an actual monk.

Few of these works seem to make any explicit political point. (An exception is the monkey-in-flowers piece titled "Pat Robertson Makes Room for the Monkey.") Rather, Necessary Fictions honors the prerogatives of imagination.