Jim Jarmusch’s film is a celebration of “everyday poetry,” and those who take the time to find it 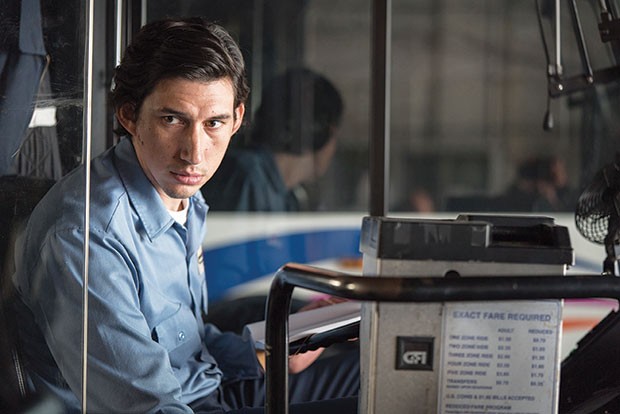 Written and directed by Jim Jarmusch, this low-key observational film spends a week in the life of Paterson (Adam Driver), a bus driver who lives and works in Paterson, N.J. His daily life is defined by routine — the same breakfast, bus route, lunch stop (at the town’s scenic waterfalls), and dog walk ending at the same bar. When not driving the bus, Paterson enjoys a quiet home life with his wife, Laura (Golshifteh Farahani) and writes poetry in a notebook. Truthfully, not much happens, except life’s small moments roll on.

Despite (or because of) his routine, Paterson is keenly observant and open to each day’s gifts, be they a particularly amusing conversation overheard on the bus, or, as in the poem that opens the film, the layers of loveliness contained in a simple box of matches. The film is a celebration of “everyday poetry,” and those who take the time to find it. There is a whimsical quality to the film, particularly in the couple’s relationship — a partnership of creative souls, tucked cozily in their oddly decorated home. Laura is exuberantly open about her artistic practices and ambitions, while Paterson is reserved, refusing even to share his poems with her, despite her effusive, unconditional support. (A photo of Paterson in a Marine uniform suggests other possibilities for his adherence to a routine.)

Besides Paterson’s prescribed days, the film also offers other motifs of repetition, from the patterns Laura paints to sightings of twins. Among the film’s bits of deadpan humor are the nods to the city itself — from the wall of Paterson memorabilia at the bar and discussion of William Carlos Williams, who wrote an epic poem about Paterson called Paterson, to a recitation of perhaps the most famous words ever to come from a Patersonian, Lou Costello’s “who’s on first.”