Pat Toomey not seeking re-election means the Pa. GOP can no longer pretend it's moderate 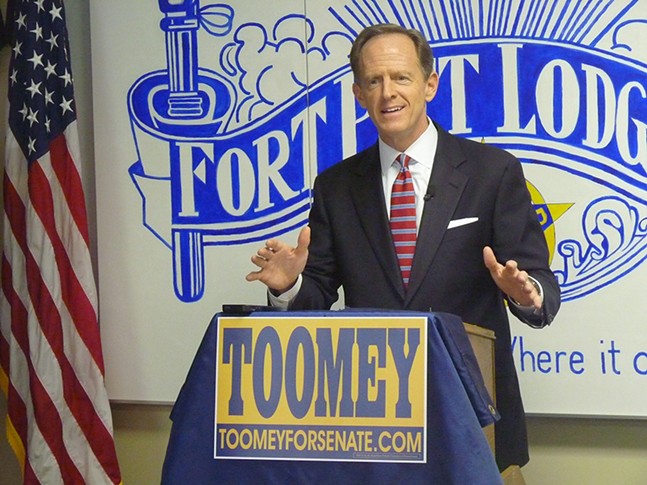 CP photo: Ryan Deto
Pat Toomey at a campaign stop in Pittsburgh in 2016
Today, the Philadelphia Inquirer reported that Sen. Pat Toomey (R-Lehigh) has no intentions to run for re-election for his U.S. Senate seat, nor will he run for governor in 2022, which he was widely rumored to be interested in.

“His decision not to run for that office or for Senate could create two wide open contests on the Republican side, while depriving the party of running its most established current political figure in Pennsylvania,” reported the Inquirer.

This is a huge hit for the Republican Party in Pennsylvania. Toomey was widely seen as the most appealing candidate for statewide office. He is the only non-judge Republican to currently hold statewide office in the commonwealth. He won election in 2010 and 2016 by less than two percentage points each time, but is still one of the state’s most seasoned Republicans.

Toomey’s voting record is very conservative, but he also cast an image of himself as more moderate, often helped along by some members of the media. He is probably the most principled proponent of free-market capitalism of any senator in the country.

Correspondingly, this gave Toomey an aura that other Republicans in the commonwealth have trouble replicating. Infamously at this point, a 2012 profile of Toomey in Philadelphia Magazine declared that “Pat Toomey is surprisingly moderate.” Of course, before that, Toomey showed very few signs of being a moderate, and since then has shown little signs of working across the aisle.

Toomey has worked with Sen. Joe Manchin, the caucus’ most conservative Democrat, on gun reform bills. But those efforts, expanding background checks to gun shows and Internet sales, were very modest compared to the fact that 89% of Americans support universal background checks. He also has some history of supporting LGBTQ non-discrimination protections, even trying to amend a 2013 bill to broaden exemptions for faith-based businesses. (That non-discrimination bill eventually failed anyway.)

In actuality, Toomey has voted with Trump 88% of the time, which is relatively high considering his and Trump’s narrow margin of victories in Pennsylvania. He demonizes undocumented immigrants, he advocates for militarizing local police forces, and he was the chief author of the extremely unpopular 2017 tax cuts. Some might find his principled stance on criticizing tariffs somewhat admirable, but that opposition against Trump’s tariffs is rooted in conservatism, not a sign of bipartisanship. In fact, many of Toomey's votes against Trump were for bills that were likely to pass anyway.

And this is the big reason why he shouldn’t be missed from holding elected office in Pennsylvania. Toomey is one of the last embodiments signifying that Republicans in the commonwealth can have their cake and eat it too. His presence in statewide office gave credence to the false notion that the Pennsylvania GOP isn’t extreme.

The Pennsylvania Republican Party has spent the last several years focusing on undermining Democrats any chance they can get, even over popular issues like fighting climate change, coronavirus restrictions, recreational marijuana, and providing non-discrimination protections for LGBTQ people. Most of their priorities are only supported by the most fervent conservatives, and don’t enjoy broad popularity.

Federally, some GOP politicians in the state won’t denounce the baseless conspiracy theory of QAnon, which falsely posits that Democrats are part of a sex slave trafficking ring and they eat babies.

Some prominent Republicans politicians openly advocated for more carbon emissions and spread anti-trans bigotry. And they are rarely, if ever, condemned by fellow Republicans. They are an extremist party that appears to be moving farther right every year.

But Toomey held a special spot in the minds of some independent-minded voters, particularly in the suburbs. In 2016, he outperformed Trump in the Philadelphia and Pittsburgh suburbs. These areas are the battlegrounds for winning statewide elections in the commonwealth.

With Toomey gone, it will be difficult for other Republicans to continue to appeal to these voters and to portray the false notion that they are concerned with bipartisanship or helping constituents. To just enough voters to help him win statewide elections, Toomey embodied this idea, even if that support was likely waning thanks to efforts by advocacy groups like Tuesdays With Toomey. In a Gravis Marketing poll from July, Toomey had an approval rating of 39% compared to a disapproval rating 47%.

Take 2018 as an example. The Republican primary for governor quickly became a sprint to see which candidate would be enough like Trump. Scott Wagner emerged with a gaffe-filled general election campaign and lost easily to Gov. Wolf. In the Republican senate primary, Trump-acolyte and immigrant basher Lou Bartletta emerged over a field of more moderate challengers. He also lost handedly to U.S. Sen. Bob Casey (D-Scranton).

It’s unclear which Republicans will now emerge to run for the two big statewide offices in 2022. Even though Toomey has yet to officially announce he isn't seeking re-election, candidates like Donald Trump Jr. and Wagner are already being floated. Trump Jr., let alone being attached to an unpopular president, is a fanboy of the far-right and was interviewed by a white nationalist. Wagner threatened to stomp on Gov. Wolf's face with golf spikes.

Candidates like these have many right-wing and controversial skeletons to grapple with that could hurt them in a general election. Toomey was successful at largely avoiding being cast as an extremist and portrayed Pennsylvania’s Republican Party as something that it is certainly not.