A sure sign that a culture of good food has taken hold in Pittsburgh is that it's rooted even in little, unpretentious places. We don't merely mean that there's good eating to be had at holes-in-the-wall; these we have always enjoyed. The heartening new development is embodied by Pastitsio, a tiny storefront café in the thick of the boutiques and showier, trendier restaurants of Lawrenceville.

Not to imply that Pastitsio is dowdy -- on the contrary. Its design is sleek and minimalist, tastefully blending rustic exposed brick and patterned tin ceiling with gleaming stainless steel furniture and a monochrome paint scheme that eschews Aegean clichés except in the script of its signage. Pastitsio bills itself as a Greek deli, with daily specials and a steam table, plus a display cooler with salads. Its offerings are few, but carefully chosen and temptingly proffered. They consist primarily of the freshest, most flavorful versions imaginable of traditional Greek dishes such as spanakopita or the eponymous baked macaroni casserole.

We began with a rib special that was particularly inspired. The ribs were sprinkled with woody herbs like rosemary and thyme and coated on the meaty side with a tomato-based sauce that hearkens back to the Peloponnese rather than Memphis or Kansas City. They were a great reminder that, underneath the rubs and mops and sauces, ribs are ultimately a delicious cut of pork. Pastitsio's were tender and succulent, meaty rather than fall-off-the-bone, and perfectly calibrated for lunch at four bones for eight dollars.

The pastitsio itself was as good a version of this mac-and-cheese-like casserole as we've tried, with tender noodles, creamy sauce, savory ground beef and a sprinkling of cinnamon on top -- traditional in Greece, but a surprise for Americans reared on mac-and-cheese from a box.

We liked that Pastitsio's menu changes daily according to what is fresh in the local markets and/or what catches owner Stamatis Bournias' eye. He doesn't always stick with traditional recipes, either, but sometimes experiments with new combinations of traditional Mediterranean ingredients.

When we expressed interest in an orange salad, he warned us that it was, as yet, unperfected, and we agreed that while the dish showed a lot of promise, it was clearly not there yet. Slices of orange were tossed with scallions, mint and mild feta for a bright, refreshing combination. But there was too much pith left in the orange, the scallions overwhelmed the mint, and the feta -- whose creamy contribution we appreciated as a counterpoint to all the sharply citrusy, oniony and herbal flavors -- was a bit scant. Nonetheless, we appreciated the kitchen stretching itself and offering its experiment up to the court of popular opinion.

Our other salad, orzo tossed with diced tomatoes, zucchini and summer squash, was a rousing success. It was seasoned with just enough dressing to lightly coat the ingredients and a sprinkling of dill that didn't overwhelm. With the nicely proportioned vegetables, it served very well as either a light entrée or a side dish. Our only objection was that the tomatoes were rather wan for this time of year; we're not yet at peak season, but we've been able to secure red, fresh-tasting tomatoes for a month or so at local groceries, and expect restaurants to be able to do the same.

Spanakopita -- Greek spinach pie -- was, in a word, outstanding: the crust golden, brittle and flaky, the interior creamy and vegetal. It was rich, but not overly so; we ordered one piece, but could easily have devoured more without an ounce of regret.

Pastitsio brings casual Greek dining to Pittsburgh on a level far broader and deeper than the familiar souvlaki and gyro shops. The trappings may be minimal and the offerings few, but the quality will keep customers coming back for more. 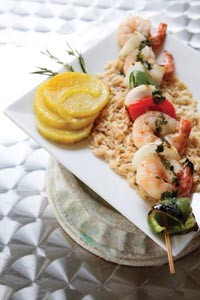