A rich and sprawling show looks backward, around and forward

Venerable art galleries in Pittsburgh are probably more likely to close than they are to get shiny new digs. So last year, when Silver Eye Center for Photography announced it was leaving its long-time home on the South Side, it was good to hear that it was only for greener pastures on the Penn Avenue arts corridor, in Bloomfield. Appropriately, the 36-year-old Silver Eye re-emerges with Past Present Future: Western Pennsylvania’s People and Places, a rich and sprawling show that looks backward, around and forward, both at the medium Silver Eye celebrates and the region it inhabits.

Past Present Future, curated by Silver Eye executive director David Oresick, includes some 130 photos and two videos, all on loan from collections and individual artists, and hung salon style in loosely thematic groupings (people, place, industry, etc.). The photos date from the mid-1800s to the present, and the 40 contributors include some of the biggest names in Pittsburgh photography, from icons like W. Eugene Smith and Teenie Harris to contemporary masters like Charlee Brodsky and Ross Mantle.

Among the most-represented artists, however, is Duane Michals. The McKeesport native (b. 1932) pioneered, among other things, handwriting on the prints to illuminate his images. The technique is crucial to his elegaic 1982 series “I Remember Pittsburgh,” in which he revisits the people and sites of his youth, some then still here (like Kaufmann’s department store), others long gone, like a burlesque joint that became a parking lot. His “Family Portrait” poses immediate relatives in front of U.S. Steel’s Duquesne Works mill. “Now,” Michals notes of his family, “we are all gone.” From the Mon Valley or from life, he means; the mill itself would shut down just two years later.

That’s Pittsburgh for you — so much is just gone, and this show recalls it vibrantly. Classic mill shots like Clyde Hare’s “Teeming Platform” — masked, long-coated workers laboring amidst rising smoke and flying sparks — summon a time when steelmaking remained very much a hands-on business. (For contrast, smart curation includes Ross Nugent’s 2013 short film “Steel Mill Rolling,” shot at a modern, automated Sharon, Pa., mill that appears almost unpeopled.) Viewing Smith’s “Pittsburgh (City at Night, Trees in Foreground),” you are startled to realize that you’re seeing Downtown from the perspective of the North Side — a whole neighborhood now long since plowed under stadia and raised highways. Martha Rial’s cleverly composed “Civic Arena” memorializes another now-vanished landmark; it’s like something famed photographer Luke Swank (also represented here) might have tried if he’d had a crack at a retractable dome. Teenie Harris’ 1969 photo of young men with the Garfield Teen Organization, holding an anti-police-harassment sign, suggests how little, unfortunately, some things have changed.

Pittsburgh’s past is ever with us — and should be, if it’s as moving as Esther Bubley’s 1951 shots of stoical parents bringing their offspring to Children’s Hospital. The future can be represented only speculatively (here, by some photo-based collages by local middle-schoolers). The present, meanwhile, can be tough to grasp. Perhaps intentionally, little in Past Present Future, for instance, documents the much-touted “new” Pittsburgh of modern medicine, high tech, higher ed, artisanal food and boutique retail. (Though William Wade’s shot of a tuxedoed Dennis Hopper at the 1996 opening of The Andy Warhol Museum does, in retrospect, herald a cultural renaissance.) We don’t even see anyone using a computer or smart phone.

Still, something of the region’s soul is here, including reminders of poverty, displaced people, and neighborhood decay as well as industrial decline. It’s in Brodsky and Njaimeh Njie’s forthright street photography; Dylan Vitone’s panoramic environmental portrait of a scruffy young couple on a Polish Hill rooftop; Ross Mantle’s “Untitled (In the Wake),” a stunning high-angle shot of a snow-covered neighborhood in evening, a single spot of streetlight at lower right. Christine Holtz and Lauren S. Zadikow tersely offer images of illegal trash dumping sites — many of them city parks.

Two other favorites. One is a haunting image from Pete Marovich’s series “Searching for Dream Street,” documenting Aliquippa, that finds a man wrapped in a Steelers blanket walking up a misty residential street. The other is Stephen Speranza’s “Wilmerding Swing at the Wilmerding 125th anniversary fair” (2015/2017), in which a girl whirling past on a lit-up carnival ride gestures as if in ecstasy. Here’s to Silver Eye’s next 36 years. 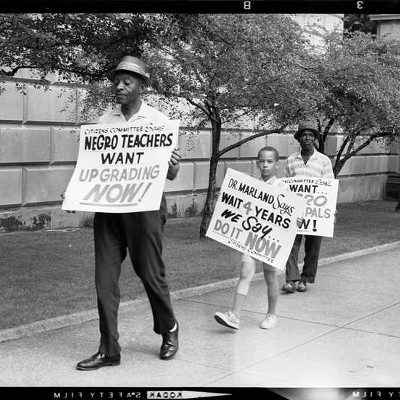