It's for people who walk together with arms linked, taking up the whole width of the sidewalk without a second thought 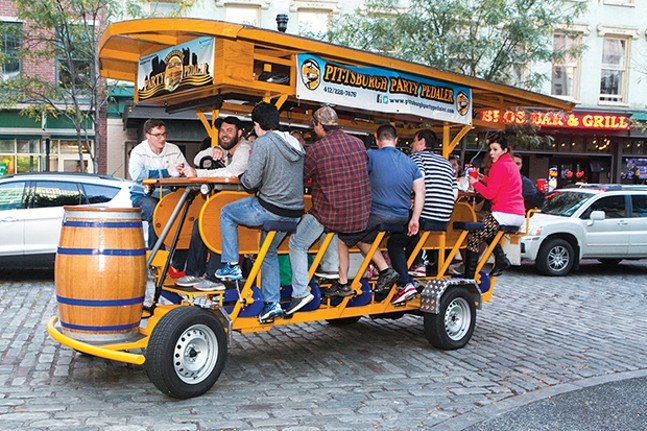 Party Bikes, those large, pedal-powered vehicles that drunkenly roam the city, combine three of my least favorite things: drawing attention, being in the way, and biking. Over the past few years, they've become commonplace in cities of all sizes. The Pittsburgh edition, called the Party Pedaler, came to town in 2013, and sightings have become more frequent, with routes going through Downtown/Strip District and the North Shore.

Contrary to how it appears, these bikers aren't actually drinking while biking (due to Pennsylvania open container laws). Or at least not visibly.

"We do allow groups to bring coolers and cups, like red Solo cups, to drink out of," says Kevin Campbell, operations director of Party Pedaler.

Mostly the party bike stops at bars along the way.

These pedalers always seem to be having a great time, whoo-ing and singing as they pedal their hearts out. But there's a dissonance between the people who ride and love the party bikes, and those who look upon them like a parasite.

I put out a call on Twitter, asking for people with strong feelings about these vehicles (good or bad) to send me their thoughts. Someone who lives in Boise, Idaho, messaged to say the party bikes are all over that city. “Bike bars are symptomatic of the rapid expansion and gentrification of the city, but on a less serious note, they’re always playing the worst music and are populated by people held together and bound to look publicly entertained and entertaining,” this someone said. “It feels like being haunted by a demon.”

Campbell says the customer breakdown is about 50/50 for local and out-of-town customers. Reading reviews on Yelp, TripAdvisor and Google shows that many of the customers, even if not from another state or city, come from the suburbs or closer to central Pennsylvania. It's the kind of novel activity a friend's mom might suggest while visiting, because it's a quirky way to see the city. But city residents might feel embarrassed at having to move 5 mph, loudly singing on a street where they might see someone recognizable on the sidewalk.

My sister, who lives in the Bay Area, said of these party bikes: “I think they exist for the sole purpose of bachelor/bachelorette parties where you go to a city without really seeing the city in any way.” Another responder, from Pittsburgh, described it as “a perfect pregame for a romantic night at the Cheesecake Factory.”

As fun as it might be, party biking is not a unique experience. Party bikes are in New York City, Nashville and Minneapolis — and also Tuscon, Ariz.; Sioux Falls, South Dakota; and Appleton, Wis..

Customer reviews rave about party bikes, giving five stars and saying they’re a "MUST" for a "fun and unique" tour of Pittsburgh. And Campbell says pedestrians who see the bike are always welcoming. "People are very receptive to us,” he says. “Most people are smiling and waving.”

The bikes are also not the only genre of transportation in the growing group drinking vehicle trend. Just a few months ago, a company called Crusin' Tikis introduced boats decorated to resemble a Tiki shack that sail along the city’s rivers. The BYOB cruise is $400 for two hours, holds six people and has no bathroom. (Some of the incredulity towards these activities comes from the fact that something so expensive doesn't even include drinks.)

Just a few weeks ago, Pittsburgh Pedal Boats launched. It operates like the bikes in that a large group powers the boat by pedaling while a captain is steering.

Boats are less prominent than bikes, and there remain some questions on where we're at with group activities. One reviewer exemplifies the enjoyment gap, noting "a great group of 16 friends, a sing out loud playlist and a wonderful driver made this the most fun thing I've done in Pittsburgh.” If a group of friends are the type of people who enjoy traveling in extra-large packs and singing in public, then, of course, this is a great activity.

They could care less, as long as they’re having fun together.