“All of those games are just like World Series games.” 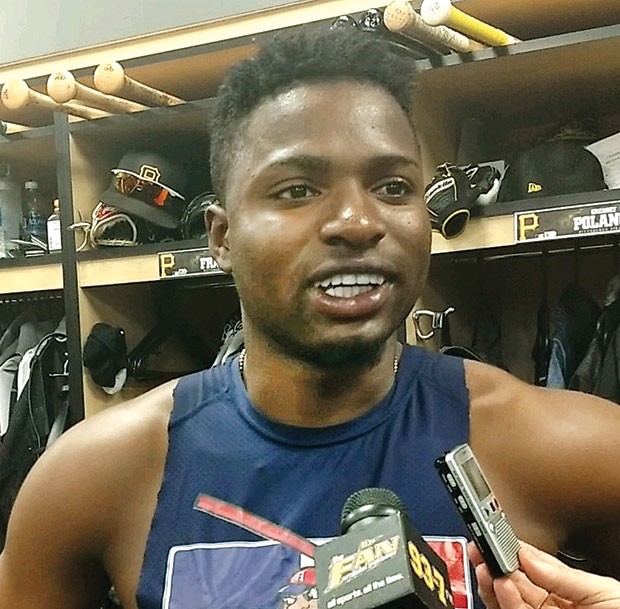 CP video still by Charlie Deitch
Gregory Polanco speaks to reporters about his time in the World Baseball Classic.

Standing in front of his locker, Pittsburgh Pirates left fielder Gregory Polanco could barely contain his excitement as he met with reporters on March 21 in Bradenton, Fla.

It was his first day back at spring training since leaving the team in early March to represent the Dominican Republic in the World Baseball Classic. He was laughing, smiling; occasionally, his speech would speed up like a kid telling his friends about the really cool parts of his first trip to Disney World.

“It was an incredible experience,” Polanco said. “It was great just to be there; it was something I’ll never forget.”

For those who don’t spend their lives from March to October watching the MLB Network (shame on you, if you don’t!), the WBC is an international tournament featuring the best players from around the world that happens every three years. It’s sponsored by Major League Baseball, so the event is filled with great players. Polanco was joined on the D.R. squad by Pirates center fielder Starling Marte and pitcher Ivan Nova. In addition, right fielder Andrew McCutchen and second baseman Josh Harrison joined Team USA (skippered by Jim Leyland, the 72-year-old former Pirates manager); catcher Francisco Cervelli played for Italy; and minor-leaguers Eric Wood, Luis Escobar and Jared LaKind were selected to play for the teams representing Canada, Colombia and Israel, respectively. In fact, this year marked Israel’s first entry into the tournament.

On March 22, Team USA brought home the championship when it blanked Team Puerto Rico. McCutchen even had an RBI single. But the WBC isn’t loved by everyone. Fans and the teams themselves worry about the possibility of player injuries. In fact, the 2013 WBC is often credited for leading to serious midseason injuries to then-Pirates Jason Grilli and Wandy Rodriquez.

In January, Pirates pitching coach Ray Searage told MLB Radio that he’s “not one of the guys that is in favor of the WBC, and the reason being — I’ve seen it over the years before — guys cutting short their rest periods for the winter and their workout routines and speeding it up.” Searage said he would advise his pitchers against playing in the tournament because, while it’s “good for baseball,” it’s not necessarily good for the players. As he told the network: “Instead of April, where you’re firing off, now you’re firing off in March, which is a couple of weeks before you should be.”

Injuries are a risk. The New York Yankees have lost shortstop Didi Gregorius until at least May with a shoulder injury. But the WBC is the ultimate sports example of risk versus reward. Injuries can happen anytime, anywhere. Remember when former Milwaukee Brewers catcher Jonathan Lucroy suffered a broken hand when his wife accidentally dropped a suitcase on it? And former Pirate and current Atlanta Brave Sean Rodriquez is out for likely the whole season after a February car crash in which his SUV was hit by a man driving a stolen police car.

But if you listen to guys like Polanco and Marte, the experience of the WBC in spring is far more beneficial than regular spring training. Initially, Polanco wasn’t likely to see much playing time. But he ended the tournament as the Dominican Republic’s best offensive player, hitting .842. These players are entering the season not with a dozen spring-training games under their belts, but with experience hitting off top pitchers throwing their best stuff in highly competitive games. It’s tough to see that as a disadvantage.

“I learned a lot seeing how [veteran teammates] prepare. I really learned a lot from that,” Polanco said. “And all of those games are just like World Series games. Each game was important. I really feel like I’m ready for the season.”

Marte also performed well in the classic, getting key hits in big games, and although he suffered a minor ankle injury it didn’t seem to impede his game. In his first game back with the Pirates, Marte hit a grand slam and had five RBI.

There’ll be a lot of pressure on Marte this year as he replaces McCutchen in center field. And while the Pirates outfield will have the same personnel, it will have a different feel, as McCutchen moves to right and Polanco shifts to left. The three haven’t had a lot of time to play together because of the WBC. But that doesn’t concern Marte.

“I believe we have great chemistry already, I don’t think there’s anything to be concerned about,” Marte said through an interpreter. “I’m excited and I believe it’s going to be a really good season for all of us.”