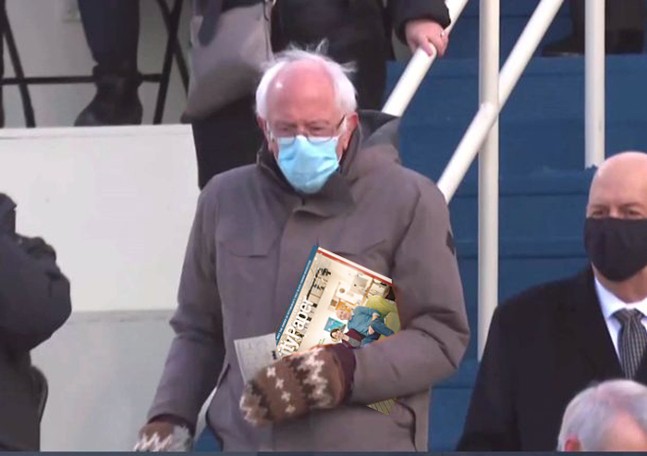 Bernie Sanders, devoted City Paper reader.
Yesterday was a strange day, as we saw one era of terrible presidency end, and another, slightly less stressful era begin. People disagree on whether President Joe Biden is the right man for the job, whether he's not progressive enough, or too progressive, or too old. But there's one thing everyone can agree on: Bernie Sanders memes are good.

All this old man from Vermont had to was roll up to the inauguration in his plain coat — the same coat he wore in another year-old meme — and sit in a chair with his extra thick mittens, and the crowd goes wild. We simply cannot get enough of editing Bernie into photos, movie scenes, other memes.

Naturally, Pittsburghers jumped on the trend and edited Bernie into everything from a parking spot to Flashdance. These are some of Pittsburgh City Paper's favorites:

Yinz, we’ve truly never seen such a fashionable use of the parking chair. Thank you @BernieSanders for reserving that spot. pic.twitter.com/fRrWjilpS3

This is a classic that has been recreated several times. Pittsburgh is obsessed with its parking chairs, and Bernie's spindly chair and patient seating is perfect for the setting.

Most of Pittsburgh was shocked when a bus fell into a sinkhole in Downtown, but Bernie is just casually waiting for the next bus to come. Also, Bernie taking a break from rides and Potato Patch Fries while resting next to Kennywood's Cowboy Joe.

Can’t take credit for this one, but it did have my howling with laughter. pic.twitter.com/X0LnPP3BZc


I am once again asking you to wear a mask. pic.twitter.com/WCd3793BIO

I tip my hat to whatever youth is running the Robert Morris University social accounts.

Look city steps can be long and steep, and sometimes grandpa needs a break.

Oh you thought Century III mall was closed? Bernie has been waiting for his wife to finish shopping for 10 years.

Good morning to whoever the Pittsburgher is that created this. pic.twitter.com/d1KwJlR8GL

I am once again asking if you are retiring. pic.twitter.com/i49jLZsh0c