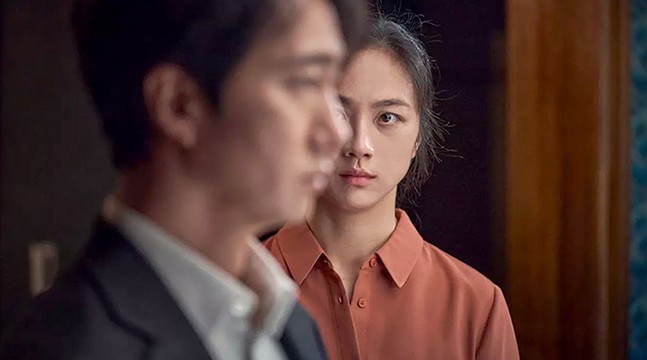 Photo: Courtesy of MUBI
Decision to Leave
Director Park Chan-wook’s new movie Decision to Leave starts with a bang — literally. Detectives Hae-joon and Soo-wan fill a body outline with bullet holes at a firing range, talking shop. It’s a tough time at the Busan police department — not enough murder cases these days, the two detectives bemoan. When a climber is found dead at the base of a mountain with a cracked watch that confirms his time of death, Hae-joon’s interest is piqued. But this is no shut-and-closed case, and, for the next two-and-a-half hours, Chan-wook sends his dogged detective off to chase the plot to its absurd, astounding end.

Audiences might not expect this Hitchcock-infused detective story to come from Chan-wook, the South Korean director whose early revenge flicks like Oldboy and Sympathy for Mr. Vengeance had many critics herding him into the nebulous “extreme Asian cinema” classification. Decision to Leave may dial down the gore and octopus mukbang, but it’s as confidently sprawling as Chan-wook’s bloodiest work. You’ll be hard-pressed to find anyone else who can throw this level of visual verve into a boots-on-the-ground police story, mix it with a big-hearted romance, and still have it float.

In his investigation into the climber’s death, Hae-joon, played by a perfectly glum Park Hae-il, questions the climber’s wife, Seo-rae (Tang Wei). He’s unsettled by how unaffected she is, but too bewitched to place her under suspicion. Wei is pitch-perfect as the stolid Seo-rae, drawing us into her mysteries with a faint wink underneath each line. Like all great femme fatales, she can ensnare the married Hae-joon with one look, seduction that he’s not getting from his wife, with whom he carries out a “weekend marriage” across town. Later in the movie, Hae-joon will tell Seo-rae that from the get-go, “I knew we were of the same breed.”

For Chan-wook, manipulation and love are two sides of the same coin. Decision to Leave risks losing itself in its twists and turns as the detective and his suspect grow more intertwined, but Chan-wook’s visuals remain lucid, even when the plot gets murky. The editing is zippy and surprising: during interrogation scenes, editor Sang-beom Kim cuts between Hae-joon and Seo-rae’s faces on different camera monitors and through reflections in the glass.

Chan-wook has been a proponent of digital cinematography in recent years — in February he made Life is But a Dream, a short film shot entirely on an iPhone 13, and his 2011 release Night Fishing was shot on an iPhone 4. But Decision to Leave is his most tech-obsessed movie. Characters utilize Siri to comedic effect, Seo-rae translates Chinese with her phone when her Korean fails her, and a suspicious iPhone pedometer plays a key role in the murder case.

The movie continues headlong through a labyrinth of puzzling and inexplicable side plots, such as a soft-shell turtle burglary that leaves our detective with a bitten finger. All the while, Hae-joon remains infatuated with Seo-rae. Chan-wook has said that he isn’t a big film noir fan, but it’s hard not to read the hard-boiled influences in Hae-joon’s insomnia-fueled nights spent surveilling Seo-rae. “It’s not that I can’t sleep because of stakeouts, I do stakeouts because I can’t sleep,” he tells his nervy young partner Soo-wan (Go Kyung-Pyo).

When Hae-joon finally reaches Seo-rae, they don’t have sex; instead, she lulls him to sleep because she knows he needs rest. Chan-wook is no prude (see: The Handmaiden), but he leaves the eroticism of Decision to Leave to benign moments— shared lip balm on a rainy day and brief glances across a sushi meal eaten in silence.

Around the middle of the movie, the plot doubles back on Hae-joon’s obsessions in a way that might come of as redundant. But Decision to Leave is all about patterns, from Hae-joon and Seo-rae’s dueling smartwatch notes to Chan-wook’s repeat clues in the form of close-ups. By the end of the movie, the police procedural fades away into a breathless love story, which was there from the start, but not in the way that audiences might expect.

Like other great noir characters, Hae-joon teeters on the knife’s edge of obsession and love. Decision to Leave asks the question: Is the thrill of love in the meeting or the leaving? Leave it to Chan-wook to answer that question with another — does it matter in the end? Chan-wook might have left the blood and bums behind for this movie, but he can still pull out the knives when he needs to.
Decision to Leave. Showtimes vary. Fri., Oct. 28 - Thu., Nov. 10. Harris Theater. 809 Liberty Ave., Downtown. $11. trustarts.org